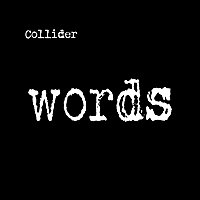 This is music without category, yet undeniably music. I would love to hear this material performed live. Its deliberate literary references place it in the category of performance poetry equally with music – these are poems without words. But why concern ourselves with classification? Is it played well? Does it engender thoughts in the mind of a listener that might otherwise remain dormant? The answer to both questions is emphatically ‘yes’. As with all good art works, a large part of the ‘meaning’ of each piece results from the interaction of the work with individual listeners and the intellectual effort that listeners are prepared to invest in their engagement. (Even so, my wife, whose level of musical engagement can probably best be described as visceral, assures me that she enjoys it too.)

Collider is a group that is co-led by tenor saxophonist Adam Simmons and trombonist Kynan Robinson. They are extremely fortunate to be able to call on three outstanding string improvisers in Andrea Keeble, violin, Jason Bunn, viola and Anita Hustas, bass. Drummer Ronnie Ferella completes the ensemble. Every individual member possesses experience in various forms of improvised performance, some of it extensive. A highlight of this, the band’s debut disc, is a four-movement suite entitled The Language In Beauty, composed by Simmons. The title of each movement contains a strong reference to the composer’s interest in Russian literature. ‘Raskolnikov’s Folly’ opens with a drums and bass foundation over which fragments of melody are introduced until a complete tune evolves. Improvised solos from violin and trombone ensue before the melody returns to conclude the track. ‘Myshin and Me’ is spare in its use of string textures; a short movement characterised by stillness. ‘Breakfast With the Brothers Karamazov’ features solo sections by each of the horns over a Latinesque bed maintained by bass and drums.

The suite’s fourth movement is called ‘All You Need’. This begins in a manner reminiscent of a piece by Ornette Coleman, its brief ‘head’ stated initially by saxophone, bass and drums. Free improvisation quickly becomes the order of the day, but instead of being gratuitous sounds for the sake of making them, every gesture is bent to the purpose of illuminating the emotional content of the ‘head’, a segment that is repeated several times in the course of the performance. An accompanying riff performed by the strings on a couple of occasions also assists the organisation of the piece. All members of the ensemble contribute equally to the effectiveness of this 3-minute work. It is a gem of its idiom.

Other noteworthy tracks are Glass by Simmons and Keeble and Hustas’s Homeland, the final item on the CD. Both are music of quiet contemplation but are far from so-called ‘New Age’ phenomena. Around its mid-point, Glass in particular develops as a thoughtful saxophone solo supported by really tasty chords played by the other instruments in the ensemble. Overall, Collider emerges from this recording as an extremely competent musical cooperative that will be well worth following as they develop their collective interests into art works of ear-pleasing variety and integrity.