Try Whistling This: Writings about Music 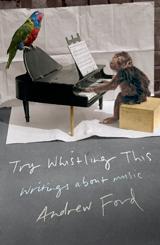 This book, Andrew Ford’s seventh, is described (reluctantly) by its author in the introduction as a book of music criticism. His reluctance is a reflection on our age as one of consumption or ownership of music as a personal phenomenon, as a determination of our membership of different ‘tribes’ defined by the facile ‘like’ of Facebook. He writes:

‘My aim . . . is to present [these composers] in the clearest possible light and to encourage the reader to listen to their work. I am not necessarily an enthusiast for all the music I discuss—and, in case you’re wondering, I certainly don’t ‘like’ it all—but I am an unfailing enthusiast for listening and for thinking about what we hear.’

Over the progression of his seven books, Ford’s writing has followed a trajectory which sees him more and more comfortable with inserting himself into the narrative, moving from the position of ‘researcher’ to ‘commentator’. This is to our great advantage as readers because Ford is a man of immense wit and insight, and both these aspects are quite obvious in his writings. His experience as a composer allows him an insider experience in the composition process, and his many years of writing and delivering radio programs have honed his talents as a superb communicator. His radio program is marked by an eclectic appreciation of a wide range of music, and this comes to the fore in his writing. Based around a core of the adaptation of his successful radio series Music and Fashion, the book includes a number of shorter essays on topics ranging from 20th century English and Australian composers, conductors, jazz composers, popular song writers, musings on European modernism and its impact in Australia, and concludes with a discussion on his experiences with the way people respond to music.

Having heard his Music and Fashion series, I was a little disappointed with the way it was rendered here—as one long chapter with a less-distinct structure. It makes for an interesting read, but makes it a little less useful for referencing. For a casual reader, this is a minor quibble.

The book has the funniest cover picture I have seen on a tome discussing music—a self-absorbed musician (a monkey) performs at the keyboard to a confused-looking auditor (a parrot), well capturing the title of the work. This is a superb collection of essays of opinion across a broad spectrum of musical expression by our finest commentator.