Truth Seekers, Lovers and Warriors sees Sydney’s world-renowned oud player Joseph Tawadros assemble a slightly unusual collection of musicians from Sydney and abroad. I have seen the Tawadros brothers (James plays req and bendir) perform in Sydney with pianist Matt McMahon, but the addition of James Greening on trombone and Scottish born accordionist James Crabb widens the sonic horizons considerably. The album is a showcase of Tawadros’s skill as a composer, and while his mastery of the oud is clear, the songs take centre stage. This was one of the things that continually struck me about this album: each of the players very much served the needs of the song. While this often left me feeling like the talents of the players were under-utilised, at the same time such restraint emphasised the chordal progressions and melodies of the compositions, as well as the beauty of many of the solos, particularly in the more tender moments. 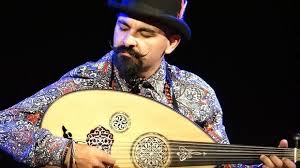 I had a lot of trouble coming up with a genre classification I was happy with: I wanted to write ‘contemporary composition’ but this doesn’t tell you what to expect, other than to expect the unexpected. Several of the most compelling compositions, including the Truth Seeker Suite in A and House of Tomorrow, reminded me a lot of influential Israeli bassist-composer Avishai Cohen’s compositional style. The unique combination of melancholy and quiet joy that I think characterises Cohen’s music could be worth looking into if Tawadros’s album appeals. Certainly, the movement toward jazz from outside that tradition (although this is by no means all that Tawadros or Cohen are doing) is something that both musicians share.

Truth Seeker presents twenty compositions (including three short suites of pieces): all are built from engaging chord progressions that mix the tone of the instruments with the tension and release of various strands of folk music from around the world. The measured phrasing, dynamism and rhythmic assuredness at the heart of Joseph Tawadros’s playing shines through on Lover, with chordal support from McMahon’s piano and wistful sustained chords from Crabb’s accordion. There is also some exquisitely lyrical playing from Greening on this track, one of the highlights of the album.

The delicacy and elasticity of James Tawadros’s req and bendir playing is wonderful – for me the highlight of his playing came on the One Note Nostalgia suite towards the end of the album, the most open and free sounding compositions of the collection.

At times I couldn’t help but think some of the compositions could have used a weightier percussion presence. Similarly, the mixing of the album – with very little to be heard from the lower register of the piano or trombone – emphasised the melodic nature of the compositions and the instruments, and while this may have been the explicit intention of Tawadros, I felt that the bottom end of some of the more dramatic parts of pieces was slightly lacking.

Joseph Tawadros manages to integrate the distinct voice of his instrument into the variety of compositional contexts he creates on this album. The thing that I love most about his playing – perhaps about the oud in general – is the way he combines virtuosic flurries of energy with a kind of cadential heaviness, manifest in the way the ends of his phrases send roots down to a lower ground bass string. This pendulous and hypnotic character shines through most on the tracks that feature less rather than more instrumentation. While there is certainly a lot of appeal to the kinetic pieces – Odd Tango and Cat and Mouse bookend the album – for me the strength of Truth Seekers lies with the compositions in slower tempos. I liked the way that, as the album progresses, there are more variations in the instrumentation used for each piece, such as the trio of our, req, and accordion on Shadow Dance or the duo formed by oud and piano (later expanded to a trio and than quartet) on Dream With Me.

Truth Seekers is another fine addition in Tawadros’s growing catalogue of recordings, one that emphasises his increasing skill as a composer.