The subject of this book, David Lumsdaine (b. 1931), is an Australian modernist composer who established his career in the UK. Although Lumsdaine has lived in England more or less continuously since moving there in 1953, he has maintained a strong connection with Australia and is renowned for his soundscapes recorded in various Australian locations. The author, Michael Hooper, is an Australian musicologist whose PhD from the University of York, was on the music of Lumsdaine. His book covers the period 1966-1980. After an introduction which provides the musical and intellectual context for Lumsdaine’s development as a composer, there is a focus on the in-depth analysis of eight works of the twenty-two works composed in the period under examination. Hooper doesn’t acknowledge that his book is an adaptation of his doctoral thesis, but parts of it read like it surely is. In his writing Hooper uses an effective mixture of third person and first person, the latter being employed when describing personal reactions to the music or to the composer’s ideas.

Hooper’s work was informed by interviews with the composer, but Lumsdaine persuaded him to be sceptical of any claims he made about his works and methods. Hooper also made use of Lumsdaine’s prefaces, program notes, articles and sketches. The sketches include the “Brown Sketch Book” (which contains Lumsdaine’s thoughts about using tone-row matrices) and the “Sketches for Hagoromo” (which present rhythms based on the Fibonacci series). The author also acknowledges receiving valuable information from Lumsdaine’s third wife, the composer Nicola Lefanu. 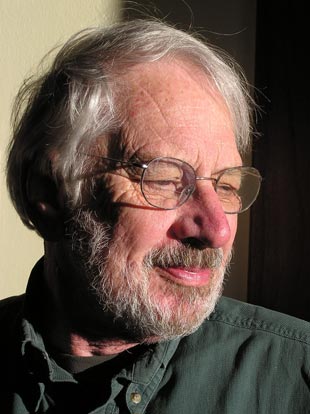 The Introduction describes the composition scenes in which David Lumsdaine developed his professional practice and technique. There is a brief mention of the musically progressive Goossens era in late 1940s Sydney and a revealing account of the Wardour Castle Summer Schools where Lumsdaine mixed with composers such as Anthony Gilbert, Harrison Birtwistle, Peter Maxwell Davies and Alexander Goehr. Hooper notes Lumsdaine’s creative engagement with late medieval, renaissance and baroque musics and makes comparisons of his approach with those of his English composer contemporaries. He also contextualises Lumsdaine’s use/influence of birdsong declaring with high modernist attitude that “Lumsdaine supplants Messiaen’s pretence of accuracy with the expression of the experience of hearing a soundscape.”

Chapter 2 is entirely devoted to Kelly Ground for solo piano (1966), which Hooper describes as Lumsdaine’s “most predetermined composition”. Its pitch elements are constructed using a set of matrices derived from a row (which Hooper dubs a “colour”) as well as a set of different pulses moving at different rates (which he calls a “talea”), thus enabling complex polyrhythmic textures. Despite the mathematical tables presented, Kelly Ground is essentially a programmatic piece that “traces the hours surrounding Ned Kelly’s death”. It has subsections that are labelled with words describing either historical events or Ned Kelly’s thoughts. Hooper makes an inventive effort to align the different textural configurations of the piece with the content of the section captions.

Chapter 3 provides a discursive account of the relationship of determinate and indeterminate aspects of composition, with a focus on improvisation as a way of developing compositional ideas. For me this chapter is the most satisfying of the book as it gives a perceptive overview of the issues of experimental approaches to compositions in the 1960s and 1970s but also problematises the continuum of determinate (fully notated) and indeterminate (freely directed) compositional practice, particularly as represented respectively in Lumsdaine’s works Kelly Ground for piano (1966) and Flights for two pianos (1967).

Hooper is at his best when he is grappling with a work he is not comfortable with. The labyrinthine Aria for Edward John Eyre (1972) which the author describes as Lumsdaine’s “largest notated piece” combines disparate (dare I say “postmodern”) elements such as spoken text (from Eyre’s exploration journals), improvisation, instrumental birdsong imitations, pre-recorded singing heard simultaneously with live singing, drones and harmonic glissandi. In his introduction Hooper admits that “this convoluted structure reflects my complex relationship with the piece, which remains unresolved, although the difficulties I had in listening to the work have been transformed into productive problematics that are now part of what makes the work so fascinating to listen to.”

The author is far less engaging when he gets bogged down in how the pitch elements of a work are assembled by complex serial processes. His chapter on the orchestral work Hagoromo (1977) promises to be interesting because of its Zen-like subtitle “The melody of a bell/The harmony of a flute”, but it quickly descends into a music theory abyss of pre-compositional tone-row matrices. In the course of a seventy-four page chapter (The next longest is thirty pages) there are 60 diagrams of tone-rows and associated matrices used to track pitch trajectories through the score. There is some discussion of rhythmic proportions but hardly any discussion of timbres, textures and overall sonic design. As a reader, one doesn’t get much of an idea of what the piece sounds like. Hooper is unapologetic, however, characterising his obsessional analytical pitch fetish as being “like an addict’s quest for the next fix”.

The composer’s engagement with the music of Bach is the subject of an analysis of Ruhe sanfte, sanfte ruh’ for solo piano (1974) [The title is a line of text in the final chorus of Matthäus-Passion]. Lumsdaine takes the first three notes of the oboe 1-violin 1/oboe 2-violin 2 counterpoint in bar 1 of the chorus and subtly infuses his piece with this material. Hooper ably interrogates the process and aesthetic of this kind of compositional strategy. He also compares the method used in this piano work to that of Lumsdaine’s Mandala 3 for solo piano, flute, clarinet, viola, cello and Chinese bell (1978), where there is a more fulsome and literal “transcription” of the Bach excerpt.

The last work considered in the book is Cambewarra for solo piano (1980), a work heavily influenced by Australian birdsong and soundscapes. It is clear from the analytical method used, that Lumsdaine’s tone-row matrix practice had evolved by this stage into something a tad simpler. Hooper searches instead for patterns based on only three notes, A/G#/D# (presumably a birdsong motif), presenting seventy-one of them as musical excerpts for comparison.

For the most part, Hooper’s heavily analytical approach is likely to be confronting and confusing for all readers except those highly informed in the field of musical modernism, such as new music composers and systematic musicologists specialising in contemporary practice. But it should also reward music students prepared to put in the time analysing Lumsdaine’s remarkable scores, after having developed an interest in his music through recordings or concerts.