I am reticent to generalise, but I am confident that many of you will agree that the notion of excitement in music has something to do with the relationship between accuracy and risk. While we like to hear music that is executed with precision, perfection is not the end-goal. While this is arguably true of all music (even that which is entirely composed and notated), risk is, for many listeners and performers, at the core of improvised music.

It is this correlation between the elements of accuracy and risk that compels the improviser to constantly strive for greater command of both their instrument and the materials with which they improvise: The more skilled the musician the greater risks she/ he can take. Enter: guitarist, James Muller. Muller’s playing on The Denominators veritably drips with a hair-raising sense of danger. It oozes from every aspect of his playing; sound, articulation, phrasing, rhythmic placement, time-feel… but it is in no way contrived. There are no ‘staged stunts’ here, this is genuine ‘going for it’; an attitude that seems so deeply entrenched in Muller’s playing that one gets the sense that he knows of no other way to play. The superstitious among you might wonder if he may have entered into some kind of Faustian pact, so compellingly intense is Muller’s playing here. But enough; Muller is a guest on this album, and is, after all, hardly surrounded by slouches.

It is rumoured (on the World wide web) that the Denominators was founded by bassist Brendan Clarke, though this album appears to be more the ‘baby’ of drummer, Paul Derricott. Regardless, Clarke’s performance here clearly demonstrates why he is among Australia’s most respected and loved players. With a rich, warm sound and impeccable intonation, Clarke’s groove based playing is never static and always melodic. If you’ve ever wondered what people mean when they describe bass playing using terms like ‘driving’, check out the bursts of walking bass on Linthorpe. 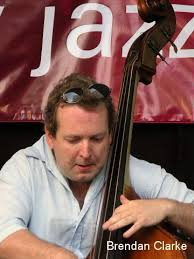 Dave Jackson’s saxophone playing also retains a wonderful sense of melody throughout, despite the harmonic complexity with which his solos are imbued. Part of this stems from his open sound, which is somewhat reminiscent of Kenny Garrett. Pianist Hugh Barrett finds himself behind a Rhodes for all but one of the tunes on the album. From this position he shows himself to be a more than competent player, but his performance leaves no lingering impression in this instance. Completing the group is drummer Paul Derricott, whose playing I have ‘met’ in this forum on several occasions. Always impressive, Derricott’s playing appears to be opening up on this recording, and taking on a sense of looseness and fluidity that complements his rhythmic accuracy and drive. While his playing is always tasteful and supportive, I find myself wanting Derricott to be less polite during some of his exchanges with soloists (Muller in particular). Derricott hints at matching the guitarist’s intensity toward the end of the Muller’s solo on The Russian, but he never quite unleashes his complete arsenal. The same sense of containment prevents the drum and guitar duet in Linthorpe from achieving its full explosive potential.

With the exception of the Thelonious Monk tune, Ugly Beauty (an imaginative reinterpretation built on a seam of Britten-esque parallel fifths), Derricott has written all of the pieces on this self-titled album. Through these compositions we see further evidence of Derricott’s maturation: The Denominators is a homogenous collection of groove-based compositions with subtle and intelligent quirks of form and metre – fertile ground for some fine playing by some fine players… and the irrepressibly blistering James Muller.