Gerard Willems’ has recorded all of Beethoven’s piano works on the Stuart and Sons piano. The recordings have been re-mastered and reordered for this 2014 re-release. They include all the Piano Sonatas, not omitting the Electoral Sonatas and Fantasia Sonata, five Piano Concertos with the Sinfonia Australis conducted by Antony Walker, the Diabelli Variations, C minor Variations, Andante Favori and Für Elise. 14 CDs plus a bonus DVD of the Emperor Concerto, with commentary, interviews and a Willems master class.

This 15 disc box set has its beginnings in 1997, with the sonata recordings finished in 2000, and the concertos in 2002-03, these earlier releases winning two Aria Awards. They were followed by the Diabelli Variations in 2010. All works have now been re-released in chronological order to track the composer’s musical development. Four sonatas are added: the three Electoral Sonatas from his teen years, and the Fantasia Sonata in D major reconstructed by a Dutch scholar from over 1000 bars of sketches. Six different Stuart pianos were used over the recordings, revealing its unique sound.

This has been a unique achievement in Australia, attracting considerable interest and airplay and much comment; the ABC has sold thousands of copies of these recordings in increasingly difficult times. With the first recordings released in the lead-up to the Sydney Olympics, it was an Olympian undertaking to record the complete catalogue of music for piano by Beethoven, and it changed the lives of the three main protagonists: Willems, the pianist, Wayne Stuart the piano maker and Brendan Ward the producer. Gerard Willems and Wayne Stuart, with some Stuart pianos

The resulting success with the Australian public has justified the recordings but I must say that initially, I was curious about their motivation. Was it to show that artists can also complete marathons of strength, technique and stamina and win medals? There are already so many recordings of Beethoven by history’s greatest pianists and orchestras – Schnabel, Brendel, Gilels, Richter, Barenboim, Kempff, Pollini – the list is long. Was it intended as an homage or documentation of Sydney pianist Gerard Willems’ work or of the Stuart pianos? Is it intended for the Australian Music Archives, as historical and national reference for future generations? Is it because no Australian has done it before and so, as with conquering Everest or the Antarctic, we must send a team, and gain the world’s attention and admiration?

It’s a massive undertaking that required courage and perspicacity and one can admire the passion and dedication of Brendan Ward, the executive producer and initiator of the project, in bringing it to completion.The book by Ward, The Beethoven Obsession, which I read only after listening to the recordings, does go a long way to answering some of these questions and reveals why Ward, Willems and Stuart wanted to do it, how they were united in their quest, and in facing the highs and lows they encountered on the way. (See review in the Book Reviews section of this website.)

The ABC press release, packaging and book accord a huge role to the Stuart piano made by obsessive and outspoken piano builder Wayne Stuart. He claims that it is unique due to his redesigned bridge “agraffe”, a string coupling device designed to maintain the vertical vibrations once the hammer has hit the string. This in turn leads to use of a thinner soundboard with less inertia, and the pianos also feature use of different materials including ceramics, stainless steel, rare Huon pine, extra notes, four pedals, with more response and wider dynamic range, the strings vibrating longer with distinct character and clarity, more color, but perhaps less evenness overall. The pianos are  notable for their ringing treble and rich bass, their extra resonances and harmonics.

Stuart has succeeded in rousing a conservative music establishment with a different sound. As Bob Carr says in the accompanying DVD: “Who would think that this great piano would come out of Australia, and out of a steel city – it’s a great story”. Some Australian composers such as Carl Vine are now re-thinking their approach to piano composition. As critic Andrew Ford says, you don’t get a smooth even sound but more colours from a Stuart, and with the extra notes there are new possibilities to be explored. So let’s discuss the sound of the recordings first. I found the recording values open to question on the solo piano recordings, with too much reverb and what sounds like fairly distant microphone placement. This is surprising because with modern studios and techniques, a satisfying balance should be found between different microphones placed under the lid at different angles and positions, and those overhead or further away from the piano in a listener’s position. It is important to find the right aesthetic balance between a close over-the-strings sound and a further away more natural room sound. The Stuart is a very bright piano with a big dynamic range and some unusual resonances – perhaps it was difficult to record more closely. The piano sound achieved for the concertos with orchestra is better, more homogenous, and the reverb and room sound make more sense. The piano sounds big, with very long resonances, but has a ringing harshness at times especially when attacked with more force and velocity. It certainly has lots of very surprising colours, sounding almost like an organ in places, bells or horns in others. There are also hissing noises that can be detected at times with the volume up loud; they could be coming from the stool, or Willem’s breathing, but I suspect pedal noise. 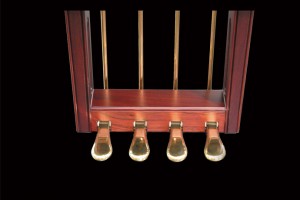 As for the music, regretfully the performances are clean but surprisingly un-moving and don’t really stack up to the greats after the inevitable comparisons. The music has its details and contrasts, some lovely phrases, images and moments but the sense of overall form, architecture or “pulse” is often lacking. Heinrich Neuhaus, the great piano teacher of Richter who wrote The Art of Piano Playing, talks about analysing and rendering the overall poetic form, image, or shape of a work. If you don’t get this right, the work loses its meaning and impact. This thought came back to me with repeated listening over several months. The dynamics, contrasts and details are observed but the overall impact is lost and one does not feel swept up in a great compelling journey. There is a distinct lack of excitement and passion or drama running through these performances.

To be quite clear, I am not referring to tempi and agogics as discussed in the excellent liner notes by Peter McCallum and the differences in interpretation and approach to Beethoven’s works as discussed and performed since Czerny, Schindler, Liszt, and Clara Schumann and the strict observance of metronome, phrase and dynamic markings, or a more relaxed approach. There is validity to all their arguments and performances as by all accounts their performances moved. But here with the Willems recordings there is inconsistency from one sonata to the next, even one movement to the next.

For instance with Sonata 31, opus 110 in A flat major, one of the great final three sonatas, the performance is neat and tidy, but lacks majestic gravitas, needing more “molto espressivo” as indicated in the shaping and phrasing, and explosiveness in the climax. Some odd choices are made as to which phrases are played very straight while others are dwelt upon, altered or underlined. One small example is in the return of the arioso before the final fugue where the phrasing and rests aren’t observed and one wonders whether the length of sound of the Stuart is getting in the way. The superb slow arioso dolente is strangely unmoving while the life-affirming fugue and final victorious conclusion are not triumphantly climactic. The piano reveals some ringing harshness at times with jangling resonances in this fortissimo section.

Sonata 27 Op. 90 begins with power, drama, poetry in the first movement, but has less space and beauty in the second movement, and generally moves too metronomically. Sonata No 26 in E flat, Les Adieux, begins strongly but the development lacks drama and passion. The playing is competent and “correct,” but lacks flexibility in the phrasing, and rubato. The third movement is good but doesn’t quite reach the lofty heights it should.

Piano Concerto No. 5, the mighty Emperor, is taken a bit slowly, with a polite, calm, measured, prudent approach compared to Barenboim, who plays with more sense of drama and elasticity and takes a faster tempo. In the slow “hymn” movement the delightful octave F sharp top note is held too briefly before the famous descending melting line which is not played legato or expressively enough to capture the magic. In the second statement by the piano the chords are a little ahead of the orchestra while the woodwinds are a little out of tune at the end of the slow movement. The final movement needs more muscularity and gusto for the famous dance Rondo of victory and optimism and more changes or contrast in the internal tempo and moods. There is a lovely and effective rallentando with the timpani, but the final cadenza flourish is not quite fully joyous or victorious. Piano Concerto no 4 lacks sufficient dynamic contrast between piano and orchestra in the sublime slow movement. Beethoven critic Adolphe Marx suggests this is the story of Orpheus pleading and melting the stern strings of the underworld to see Eurydice but we don’t feel the struggle between the lone vulnerable piano, and the all powerful orchestra and destiny so well caught by Kempff or Pollini. So ultimately it’s not the all-moving, all-powerful, unforgettable event it can be.

Ward says that self-effacement is one of Willems’ more endearing qualities, that he lets the music talk “without the jarring interference of a pianist’s ego”, something that for him mars many of the previous recordings of Beethoven since the Schnabel/Gaisberg recordings. Willems prior to these recordings had been described to Ward as “an unknown, a session pianist, a repétiteur”.

Willems himself describes the challenges and the necessity of a “less is more” attitude to playing the Stuart piano and brings an understated and ego-less approach. One wonders what concessions were made between the Stuart piano, Willems’ own style, technique and interpretation, and the recording and production values in creating the final result.

Is this result appropriate for a massive series of recordings of Beethoven, the composer whose music and life expressed so much passion, heroism, turbulence, hardship, struggle and love? As Leonard Bernstein is quoted in the book: “No composer has ever lived who speaks so directly to so many people, to young and old, educated and ignorant, amateur and professional, sophisticated and naïve. And to all these people of all classes, nationalities and racial backgrounds, Beethoven’s music speaks a universality of thought, of human brotherhood, freedom and love”.

The DVD released with the box set contains a performance of the Emperor Concerto with comments by Willems which are interesting although they sound more like liner notes than his inner-most thoughts. There are also numerous interviews including one where Antony Walker amusingly reveals he likes to conduct Beethoven with his hands alone, apparently to get a rougher sound from the orchestra. It is especially worthwhile for the master class where we are introduced to two young pianists from Queensland, Jayson Lloyd Gillam from Dalby, 17, and Robert Manley, from Brisbane, aged 12!

Their talent and enthusiasm so early in their own journey is inspirational and moving, and perhaps that is the best thing about this box set and venture – it will inspire a new generation of Australians to explore, perform and record Beethoven, to follow their dream, take up the challenge, share the passion and pass on the flame.

SEE the Book Reviews section of this website for a review of The Beethoven Obsession, an account of the project.