Songs from the Paddock to the Trenches. Music by Martin Wesley-Smith, lyrics by Peter Wesley-Smith This 2xCD set celebrates the 70th birthday of Martin and Peter Wesley-Smith, their creative partnership and the long-term collaboration between them and The Song Company. The earliest piece was written in 1965 and the latest in 2011- roughly half a century of innovative works from that special relationship of twin brothers, one a composer and the other a wordsmith. Kangaroo Valley’s George and Ira is Andrew Ford’s description of them in his perceptive essay in the CD booklet, aligning them with the brilliant Gershwin brothers. The first of the CDs, entitled Songs from the Paddock, contains seventeen songs on a theme somewhat dubiously described as ‘rural’. Roland Peelman refers to some of these as “The songs we just couldn’t sing…” because their subject matter is rather, um, unusual in the so-called classical music milieu: accidental castration and what the dog ate for dinner (Poor Paddy O’Rourke from Mudgee), artificial insemination (Ain’t Natural), masturbation (Recruiting Song), homosexuality (We Thought We’d Lost You, Johnny), bestiality (Lines by a Lovelorn Cowhand) and various bodily functions (The Duchess, Lord Jim and Me). The music varies between barber shop, Noel Coward-ish style, music hall and quotes from whatever suits the words, such as bits of nursery rhyme, American evangelistic rant or hilarious falsetto hectoring. Only slightly more subtle is the double entendre in The Day We Found O’Reilly’s Chook in Mrs Boon’s Backyard. These are very funny songs and the singers obviously enjoy Martin’s clever interpretations of Peter’s witty words. Parental Guidance may be advisable.

No rural collection in Australia would be complete without a mention of cricket, which is represented by two ballads: Sticky Wicket and I Got Him with a Googly, plus a tribute to The Don. Also out in the paddock are some politicians from earlier times via a cheery, satirical discourse on The Good Old Good Old Days:

“In the good old good old days
When we were young enough to dream
Of renouncing nuclear war
And the Snowy Hydro Scheme
When John Howard was a wonderful fellow
Or so thought young Peter Costello
When we didn’t throw stones at that nice Alan Jones ….”

Martin sets the verses in waltz time, including a quote from The Blue Danube, with his usual rhythmic changes to liven things up. 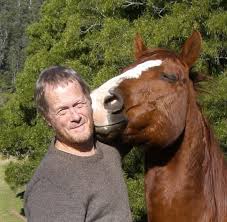 Martin, in the paddock, gets the news

Contrasting are the wistful setting of Henry Lawson’s Our Andy’s Gone with Cattle with its slightly Scottish flavour and the dramatic, sombre depiction of a dying stockman in Adam Lindsay Gordon’s Hold Hard, Ned; these show a gentler side of the composer. Together is an almost sentimental song about ageing until the lyric pulls us back to earth, for example:

Those who know Martin Wesley-Smith’s output will not be surprised that Lewis Carroll, who has inspired much of his work, makes an appearance. Mrs Hargreaves Remembers reminds us of the distinctive writing in earlier ‘Carroll’ pieces Snark Hunting or Boojum, with its unique rhythmic piano figures, dramatic chords, ragtime, syncopation and use of nursery rhyme.

You would be mistaken to think that the major content of the collection is trivial. It is not. Yes, many of the pieces are jocular or ironic, and none of them are daunting to listen to, yet frequently the topics tackled are challenging contemporary issues. Whether critical or contemplative, this compilation is a significant exposition from the Wesley-Smiths of their philosophies of life. Political satire and disquiet at the state of the world drive the content of CD2 – Music from the Trenches. The trenches here are the in the battleground of politics, spin doctoring, disinformation, dishonesty, bigotry, environmental issues, racism, the stolen generation, Big Brother and more.

doublethink, a commission from the Song Company in 2005, is a theatre piece, an eloquent exposé of appalling human behaviour, ironic and humorous in some ways, yet scarcely hiding anger. Lies, propaganda (“weapons of mass deception”), suppression of reasoned debate, euphemism eg “you have been negatively impacted” = “you are dead”. The pacifist side is put: “We try to reason, You call it treason”. The words should be especially noted – there is much food for thought.

Weapons of Mass Distortion combines live piano and prepared electronic collage of recorded quotes of George W Bush where his weapons of mass destruction and his arguments for the invasion of Iraq are thoroughly distorted by the composer. Pop Goes the Weasel and Humpty Dumpty become, in Martin’s hands, a tool for ridicule. Quotes from Lewis Carroll, the ABC theme, our national anthem, Good King Wenceslas are all added
into the mix, making the work interesting and fun to listen to, satisfyingly satirical and also deeply disturbing.

Reminiscences of a Foreign Minister is a farcical rendition of utterances by Alexander Downer at the Australian Wheat Board enquiry, apparently in the order in which they were spoken: “It could have been; it may have been; I don’t specifically recall; I can’t precisely remember; I don’t recall” etc etc – four minutes’ worth of denials. It is a comical and scathing portrait of Downer and, tangentially, of many others who refuse to admit the truth.

The problems of racism and the stolen generation receive a poignant interpretation in a solo that brings tears to the eyes:

A group of five works for the ensemble deal with various environmental issues, such as water, eg Who Stopped the Rain? Water is also a topic for Freddie the Fish who complains: “I’ve lived in some quite unhygienic discharges, pestiferous chemicals, purulent poisons and nauseous toxins which industry has dumped over me” (you might be eating him for dinner!) Illegal poaching of elephants for ivory, climate change deniers and finally Nobody Cares Anymore concerning extinction of species describe a bleak outlook for our planet.

The East Timor situation has inspired much from the Wesley-Smiths over the years, including the major work, Quito, which won a Lowin Award in 1997; it is excerpted in a gentle piece called Blown by the Wind. In the beautiful work, The Fighters Who Fell, Martin sets a translation of words by East Timor resistance leader Xanana Gusmao to an East Timorese tune. These compositions are full of sadness and resignation. After the Storm is similar in ambience.

To summarise, the music is always enjoyable, packed with rhythmic and harmonic inventiveness in the same sort of way Percy Grainger spiced up his compositions. The Wesley-Smiths have clearly decided to write words and music that will reach as large an audience as possible – they have a message and they want it heard.

The performances are all excellent. The voices in the ensembles and male quartets blend superbly and the soloists are splendid. Their joy and passion for singing is evident. One can almost see the body language at times. Song Company members past and present are included in this CD set, too many to mention here but they are clearly identified in the accompanying booklet. The brilliant Roland Peelman is conductor, pianist and organist. Having been the Company’s inspirational director for the last 25 years, he has recently moved on to other things, but hopefully this is not his last appearance with them. His insightful essay is printed in the booklet.

Tonmeister Bob Scott recorded most of the works at the Trackdown Studios in Sydney, apart from four ABC recordings; there is little discernable difference in acoustic. The package is attractive. It would have been an asset to have the texts included, but would probably be impractical.

Overall, a terrific product and an important document for today and the future.