Sideband is a composer-performer collective initiated by a small group of energetic and enterprising composers – Brad Gill, Tristan Coelho and Peter McNamara – whose aim is to motivate the writing, performance and recording of new music, including their own. 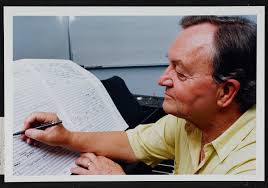 Many of the personnel involved in this CD have affiliations with the Sydney Conservatorium of Music, and an influential teacher at that institution for some eighteen years was the distinguished composer Bozidar Kos. We hear the master’s craft in the exhilarating Modulations, a colourful display for Jane Duncan (flute), Winnie Lin and Brad Gill (percussion) and electronics. Written in 1974, this dynamic work aligns perfectly with the remainder of the CD’s repertoire which dates from 1996 to 2012. It is a valuable addition to the catalogue of recordings of music by Kos, who died in 2015.

Brad Gill is both a performer and composer. The first of his two compositions on this CD – Crickets – is based on several haiku (translated into English) by the Japanese poet Basho: “dying cricket – how full of life his song”. Baritone Mark Donnelly deftly manages a score which requires high and low notes, from whisper to shout, spoken word, Sprechstimme, as well as lyrical song. Opening with sparse piano chords, this imaginative piece successfully creates an oriental atmosphere; it is an accomplished product from a gifted musician who was then still an undergraduate. The composer plays percussion alongside his colleagues Charlotte Fetherston (viola), Jihyeon Lim (piano) and conductor Anthony Clarke.

The Japanese theme continues in Gill’s Light, Snow and Suicide, inspired by a scene in a Japanese art film which combines images of snowflakes, moonlight and blood – described more fully in the CD booklet. This piano solo, with its sparkling, textured layers, is performed by the brilliant Kerry Yong. Brad Gill dedicated the recording of the work to his inspiring teacher, the eminent composer and pianist, the late Roger Smalley. Peter McNamara’s two pieces are for solo instrumentalists. Voltage is a virtuoso percussion work full of complex rhythms and rapid passages, mainly for drums and wood/temple block. The level of skill required for this absorbing composition seems effortless in the expert hands of Claire Edwardes. Cadenza II for cello features “an emphasis on extreme virtuosity, particularly independent writing for the performer’s left and right hands”. Julia Ryder executes this, and more, with dazzling technique. Tristan Coelho was inspired by a rather bleak poem The Writer’s Hand by British poet David Gascoyne: “. . . five pale, effete / Aesthetic-looking fingers, whose chief feat / Is to trace lines like these across the page . . .” The subject matter is basically about writer’s block, which the composer has probably experienced given that he selected this text – but no longer, because here we have a striking work, unsettling and powerful. We sense the struggle. Are they laughing or are they crying? The vivid performances by Susannah Lawergren and Anna Fraser (sopranos), Lanneke Jones (mezzo-soprano) with their conductor Roland Peelman, are outstanding.

The intriguing sounds of bass recorder and vibraphone are Coelho’s choice for As the Dust Settles, evoking the effect of a reddish haze caused by a dust storm over the east coast of Australia and the eventual emergence of shapes through the blur. The unusual partnership of instruments creates a captivatingly dreamy soundscape. The piece was commissioned by Alicia Crossley for her 2015 CD release entitled Addicted to Bass where she was partnered by Joshua Hill; here she plays it with Brad Gill.

Of silence into silence is a setting by Chris Williams of Judith Wright’s poem Dream, a “mystical search for a never-explicit salvation”. Soprano Nicole Thomson executes wide vocal leaps and more with assured intonation and clarity. Her expressive interpretation is supported by subtle, delicate writing for percussionist Brad Gill. The composers, performers and engineers have combined to present an impressive program of music of our own time – varied, vibrant and very listenable. The passion, skills and commitment of musicians such as these will undoubtedly ensure the ongoing well-being of contemporary classical music in this country.

And, once again, the Wirripang team has taken a further step in achieving its stated aim: “the furtherance and growth of Australian artists”.