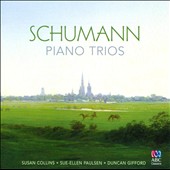 Robert Schumann was surely one of the great figures of European music in the 19th century, one who really did play a pivotal role in turning musical composition in new directions. His originality as a composer was underpinned by deep scholarship and an energetic engagement with contemporary music, not to mention a great generosity towards other composers. He founded a journal for new music in Leipzig that continues to this day, and his writings about music were passionate, analytically insightful, and influential. Despite all this, he did not receive a great deal of recognition for his work, and had great difficulty finding long-lasting paid work. To a surprising degree, Schumann remains a rather neglected great composer and I can’t help feeling that in terms of a more thorough appreciation his time is yet to come. While some pieces, notably the early piano works and the great lieder-cycles, are established repertoire, much of his other music is heard rarely if at all. This double-CD recording of all three piano trios is a welcome addition to the ABC Classics catalogue, all the more so given the high quality of the performances. Composed in 1847, the trio Op. 63 is a powerful work in D minor—an overt homage to Mendelssohn. Its expansive first movement reminds us that Schumann possessed an almost Mozartean melodic fecundity, coupled with a genuinely innovative rhythmic imagination. This trio does present some challenges for the performers, not least of which is that the writing is at times rather dense and if not carefully managed the overall sound can become turgid, dominated by the heavy piano part (to some extent, this is a result of the difference between pianos of Schumann’s time and of today). While the Beaux Arts Trio, in their benchmark recording (Decca), managed to produce an almost supernaturally clear, glittering sound (aided by a very immediate, close recording), Collins, Paulsen and Gifford have opted for a mellower and richer tone that highlights the elegiac qualities of Schumann’s music. Throughout these performances, Gifford controls the almost orchestral piano writing effectively (there are even a few clearly Wagnerian moments in the score) but without sacrificing colour and strength. Schumann was a composer who did not so much wear his heart on his sleeve as on a great banner—and he externalised a great deal of his emotions and thoughts through literary alter-egos and also in his music. The performers here and indeed throughout the CD demonstrate thoroughly exemplary and imaginative playing, negotiating sensitive and intelligent solutions to the challenges of Schumann’s scores. In the extended lied of the third movement, Collins and Paulsen sustain the incredibly long lines with great intensity, avoiding sentimentality and revealing a sublime, heartfelt dignity.

The composer himself believed the second trio, Op 80 in F major (also composed in 1847), to be a little more accessible than the first. Certainly, one senses that there is a greater transparency of texture, and the orchestration of the ensemble presents less immediate difficulty. Interestingly, this allowed Schumann to exploit the musical materials to greater advantage, with an improved subtlety of detail and also a greater integration of the ensemble. In the first movement, we are able to hear some beautiful and lively accompaniment figures that would have been lost in the more blocked-out texture of Op. 63. In the slow second movement—once again a lied—this is evident in the more equal roles of the three instruments, with the important material playing across the ensemble with greater fluidity, no longer simply violin or cello with piano accompaniment. Collins and Paulsen create a magically ethereal ending to this movement, as the string instruments take on a voice-like quality, the breath of a whispered lullaby.

In the 3rd movement of Op 80, the performers in this recording bring to life very effectively the complex nature of this wonderful slow dance, which draws from Beethoven (whose chamber music Schumann had studied closely) to give a remarkable premonition of late Brahms (his much-loved protégé), combining a Viennese elegance and elegiac mood. This is music of great beauty and subtlety, brought to life as a revelation. We are reminded of Schumann’s importance as a link between the Viennese masters he revered (Beethoven and Schubert were still alive during his childhood) and the 20th century modernists via late Brahms, Mahler and Schoenberg.

The G minor trio Op 110, Schumann’s last, was composed in 1851. This performance brings out its epic qualities, from the great sweep of the first movement to the massive humour of the finale, where Schumann seems to revel in his vigorous material and in his ability to handle the instruments as an ensemble with complete confidence. The manic enthusiasm of Schumann’s high-spirits, however, was in real life counter-balanced by equally extreme periods of darkness, and we catch glimpses of this in his music of the 1850s. In the slow second movement of Op. 110, the opening themes (this time tending a little towards the sentimental) give way to a fierce, angry middle section. The third movement also has a shadow about it, like a frightening folk tale from a northern winter (this, incidentally, is the only part of all these recordings where I felt the tempo (‘rasch’, fast) might have been just a fraction faster, slightly less ponderous—otherwise the performers have judged such things very well).

What a profound delight this music is—and how terrific to hear it performed so wonderfully by these Australian musicians. The creativity, warmth, humanity and intelligence of the composer have been very well served in this recording. To play this music so successfully requires not just individually good players, but also a superlative ensemble, which is quite another thing. This is not just about technical proficiency, musicianship, and team-work—it also requires real intelligence, deep understanding, and a capability for collegial negotiation in the solving of real challenges and problems. The recording of all three of these trios together is a large undertaking, and the release of this work on ABC Classics brings Schumann’s work into the 21st century with renewed vigour and relevance.