Schubert: Symphony No. 8 ‘Unfinished’ and Incidental Music to Rosamunde — Selections 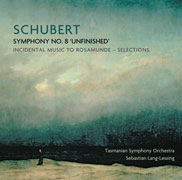 [John Weretka reviewed two recordings by the Tasmanian Symphony, this one and Mozart: Arias and Orchestral Music. The complete review, comparing performances by the orchestra ten years apart, can be found under the Mozart title. What follows here is the review of the later, Schubert recording.]

Much more rewarding a listen is the more recent recording of Schubert’s ‘unfinished’ symphony (if that is what it is — there is some argument about exactly how unfinished it is), a work not lacking for competitors in recordings. The orchestra makes a compelling case for the symphony, with lucid, tightly-argued playing. It’s been some time since I’ve been quite so struck by the sheer relentlessness of the first movement of this symphony, with its obsessive concentration on the first three scale degrees of B minor, and the way in which the mood of this movement looks straight back at the overture of Mozart’s Don Giovanni. The alternation of sun and storm in the second movement is finely judged, without histrionics. Indeed, this judiciousness is a real hallmark of the recording — everything is in its place, accents are just right, juxtapositions are played and not over played. Schubert’s conception speaks clearly from each passage.

After the symphony, the overture to Die Zauberharfe and three movements from the incidental music to Rosamunde seem pendantic, but it is somewhat surprising that the orchestra did not choose to record the entr’acte from Rosamunde that has been posited as the lost fourth movement of the symphony to round out what has been such an insightful account of it. All in all, this is a fine recording that speaks of a fine orchestra in highly capable hands.