This recent release from ABC Classics has the Melbourne Symphony Orchestra in superb form playing Richard Strauss (Don Juan, Vier letzte Lieder, Also sprach Zarathustra) under the baton of Sir Andrew Davis, its chief conductor. Strauss had consummate skill in writing for instruments in colourful, idiosyncratic ways and the recording is excellent, so we are treated to an auditory feast. And Davis’s collaboration with the Canadian soprano Erin Wall (b.1975) in the Vier letzte Lieder (Four Last Songs) has produced a performance that rivals in sheer beauty my favourite recordings of these glorious songs (Janowitz/ Karajan, Jessye Norman/ Masur, Margaret Price/ Sawallisch, and Rene Fleming/ Thielemann). Don Juan, composed at age 24 in 1888, was a major compositional breakthrough for Strauss and put him firmly in the international spotlight. Alexander Ritter, a composer, philosopher and part of the inner Wagner circle, had encouraged him to abandon the traditional forms of the “pure” music of Mozart, Haydn and Beethoven in which he had been so well trained by his father, and to explore instead the symphonic poem as a vehicle for his individuality. They both thought sonata form could develop no further. Strauss studied the “impure” music of Wagner (much to his father’s disgust), and in Don Juan he uses particular motifs for the characters (à la Wagner), and one can easily follow the story describing the Don’s seduction of three women, his despair at the realisation that he will never find an ideal woman, then his guilt at what he has done and his death in a duel where he allows himself to be killed.

The orchestration was brilliant and imaginative. Whilst practising for the first performance, the players of the Weimar Opera orchestra complained to Strauss bitterly that it was just too difficult! Not so the MSO who breeze through it with wonderful virtuosity. I prefer Don Juan to Also sprach Zarathustra, composed eight years later, where I think the music has become overblown. Strauss used concepts from Nietzsche’s massive tome of the same name and here the CD notes are very useful, as is a BBC talk by Stephen Johnson (go to http://www.bbc.co.uk/programmes/b015ypbc) for understanding up to a point what it is all about. The unforgettable opening bars – the sunrise – were used by Kubrick in his film 2001: A Space Odyssey, but they are not matched in interest by the rest of the piece. Overall Also sprach Zarathustra sounds strangely dated to me now and I welcomed a dose of “pure” music as a palate cleanser after hearing it! But there is nothing amiss with this performance by the MSO… 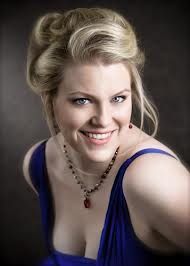 The highlight of this disc is the Vier letzte Lieder sung by Erin Wall. Surely these songs are some of the most beautiful ever composed! They were the final completed works of the 84 year old Strauss, published posthumously. He hadn’t conceived of them as a cycle and it was a canny publisher who put them together as a cycle. Davis and Wall use quite fast tempi like those of Price and Sawallisch, and the resulting effect is not tinged with melancholy, as in the interpretations of Norman and Fleming. It seems Strauss was peacefully accepting death after a life well-lived, as he said that he had spent ”an eighty-year industrious honourable and good German artistic life” (quoted by Alan Jefferson, p.225, The Life of Richard Strauss). In this interpretation, death is seen as a welcome release for a soul who had always sought to soar freely, and in “Im Abendrot”, set to a poem of Joseph von Eichendorf, an elderly couple are resting hand in hand and enjoying the sunset together. Strauss adored his wife Pauline (a Wagnerian soprano) despite her difficult nature. There is tenderness but not melancholy in Wall’s singing of this extraordinary song. She has the ideal instrument for Strauss – effortlessly producing a huge sumptuous sound or a delicate pianissimo with the same ease, and there is no affectation in her interpretation. Her pronounced vibrato gives her voice a radiant shimmering quality so she blends into the orchestral texture like a human violin. One feels embraced and lifted up on glorious waves of sound.

In the 70’s, a CBS recording by Andrew Davis and an unknown soprano, Kiri Te Kanawa, was the performance that put her on the world scene. I wouldn’t be surprised if a similar thing happens to Erin Wall with this beautiful performance! For it alone I can strongly recommend this disc to all music lovers, whether they are currently Strauss fans or not.