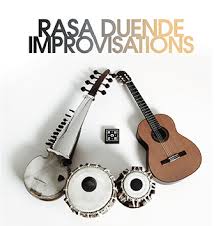 In the mid-sixties musicians from India, Pakistan and the West began exploring each other’s musical traditions, looking for common ground, playing concerts together and eventually recording together. The trailblazers were Yehudi Menuhin and Ravi Shankar. These two giants of their own musical heritages, having met in the fifties, developed a great mutual respect both personally and musically and recorded three seminal albums of duets titled West Meets East (1967, 1968, 1976). West Meets East was number one on Billboard’s Best Selling Classical LPs for 18 weeks in 1967 and continued to top that chart through to January the following year. It is impossible to over-estimate the impact this ground breaking collaboration between two of the world’s finest musicians was to have on the development of cross-cultural understanding between the subcontinent and the West. The excitement generated quickly jumped into pop music with bands like The Beatles, The Byrds, The Rolling Stones, Donovan and Traffic all travelling to India and incorporating Indian instruments, particularly the sitar and tabla drums, into their music. For millions of listeners around the world this was their first taste of the exotic sounds of the subcontinent. I was one of them when in 1967 at the age of thirteen I heard George Harrison’s song Within You Without You on the Sergeant Pepper’s Lonely Hearts Club Band album and decided right there and then to go to India to find out where these amazing sounds came from. I arrived there in the mid-seventies along with a motley collection of backpackers, students, dope smokers, meditators and hippies and spent more than two years on a musical and travel odyssey spanning several journeys that culminated in 1983.

Since the sixties many great musicians from India, Pakistan and the West have come together to compose, perform and record works that bridge the musical divide that was breached by Menuhin, Shankar and Harrison. They included Ali Akbar Khan, Peter Gabriel, Zakir Husein, John McLaughlin, Nusrat Fateh Ali Khan, Michael Brook, Miles Davis, Taj Mahal, and Philip Glass. These experiments achieved varying degrees of success but none reached the heights of the Shankar/Menhuin sessions. Then in 1993 another high water mark was created when American slide guitar virtuoso Ry Cooder met the creator and leading exponent of the Mohan Vina, Vishwa Mohan Bhatt and an hour later recorded the sublime and wondrous album A Meeting by the River. To me this brilliant album along with the original works by Menhuin and Shankar remain the benchmarks of artistry in collaborations between East and West.

Working together and creating music that does not dilute the traditions and technical achievements of both cultures requires great virtuosity and a musicality that transcends the cultures of origin and creates music that is neither Indian nor Western. New heights of artistry can be realised but it is no easy task. So, while many have tried few artists reach or even approach the heights of Shankar and Menhuin in the 60’s and 70’s and Cooder and Bhatt in the 90’s.

It’s not at all surprising that Australia, being a highly successful multicultural society, has spawned many music projects that cross the boundaries of nations and cultures. Many fine Australian artists from jazz and classical genres have worked with musicians from India and Pakistan to create excellent music. Sandy Evans and Tony Lewis in particular are trailblazing with their Indian colleagues in this field. So, to this CD: Rasa Duende. Improvisations by Bobby Singh, Adrian McNeil and Damian Wright. This recording opens an excellent new chapter in the exciting story of the partnership between East and West. Before responding to the music recorded, I think, especially in this context, it’s valuable to understand the backgrounds of and the instruments played by these three Australian musical explorers.

Bobby Singh is Australia’s leading tabla player. He studied tabla in Mumbai with leading masters of these most intricate and tonally diverse drums and has played with some of the world’s foremost Indian classical musicians. Damian Wright is an Aria-nominated flamenco guitarist. He has received great accolades from reviewers for his flair, technical skill and his fiery brilliance. Adrian McNeil is an ethnomusicologist specialising in Hindustani music as a scholar and as a performer on the sarod. The sarod is a twenty-five stringed plucked lute that is better seen and heard than described in words:

The sarod also happens to be my favourite Hindustani instrument. Adrian McNeill is no hippy dabbler in Indian music. He studied sarod with Ashok Roy who was a long-time student of the legendary Ustad Ali Akbar Khan. Adrian is an internationally respected sarod player. How wonderful that these three brilliant exponents of their instruments and the cultural heritage that comes with them all live in Australia and are able to pursue their craft as well as explore musical collaborations with other Australian musicians.

Improvisations is the first CD released by Rasa Duende. It is all very good and at times it’s great. To me it is far better than virtually all the collaborations between Indian and Western musicians since the sixties. Beautifully recorded, mixed and mastered, it includes excellent interchanges between these three exemplary explorers of their own and each other’s musical heritages. It’s not surprising that it doesn’t quite reach the heights of the Menhuin/Shankar sessions or the Bhatt/Cooder recording but it is a very fine contribution to the musical partnership between East and West.

Bobby Singh’s tabla playing with Damian Wright’s fiery flamenco guitar is stunning. The way the sarod and guitar trade improvised passages reaches amazing power while the tabla holds the music together and punctuates with the melodic instruments in a way that only musical affinity, eye contact, sensitivity and great musicianship make possible. The excitement this group can generate in full flight is breathtaking. Most of the album is fast and brilliant with impressive passages of technical skill coupled with emotional energy. The more serene meditative pieces are beautiful and mesmerising. In future I’d like to hear Rasa Duende stretch out into longer pieces that take the listener on the extended journeys that this style of musical narrative can develop given more time.

In the hands of these three masters the combination of these three instruments seems natural. The Flamenco and Hindustani traditions share much in common due to their pyrotechnical excitement, emotional uplift, contemplative moods and improvisational prowess.

I certainly hope Rasa Duende continue their musical journey together. This first album is so good that I am sure their future work will be astounding.