Claire Edwardes has had a stellar career as a solo percussionist of new classical music. This, her third solo CD release with Tall Poppies Records, presents repertoire for small collections of percussion instruments that will conveniently all “fit into a car”. Edwardes considers that when composers write for a solo percussionist and limit the number of instruments, their efforts are stronger and more compositionally focused. This collection of recordings, including several works written specially for the project, is a tour de force of new music percussion performance interpretation. The selection of works is impressive and the execution flawless.

The opening tracks, Rebonds A and Rebonds B (1987-89) by Iannis Xenakis, are groove-based pieces, scored for instruments such as bongos, congas and woodblocks. The composition strategy is effectively based on the gradual development of repetitive musical ideas.

Matthew Slomowitz’ Hi Hat and Me, written specially for this recording project, utilises only the standard drum-kit apparatus of the hi hat. Slomowitz writes effectively for this instrument but also asked the percussionist to vocalise while playing. The vocal execution is precise but could be more theatrically expressive. 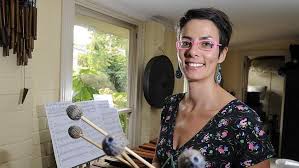 Balancing the earlier Hi Hat and Me, Frederick Rzewski’s To the Earth combines a minimalistic instrumental texture with a poetic text performed by Edwardes. The final track Bongo-O also projects vocal utterances into a virtuoso bongo performance.

Although one is performed by one percussionist, it has a surprisingly large range of engaging sounds and textures. Highly recommended!