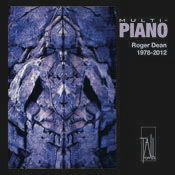 This retrospective of Roger Dean’s work as an improvising pianist covers samples of work created from 1978 to 2012 from a variety of sources including recording sessions, live performances, live performances using pre-recorded material and studio-based editing/remixing exercises. Dean employs a range of styles and approaches to the piano, by itself and combined with electronic sounds. He organises the two CDs under headings which generally give a good idea of the artistic approach and the combination of sonic elements. The notes in the CD booklet give further useful information about each item. Unfortunately the look of the booklet is spoilt by incorrect numbering of the CD 2 tracks [Tracks 6 to 12 are all assigned the number 5]

CD 1 is titled Inside and Out: impure piano, a reference to Tall Poppies’ Totally Prepared CD releases of legendary jazz/experimental musician, Roger Frampton. It begins with a series of tributes to jazz performers “in the traditions” including Harry Miller, Bill Evan, Thelonius Monk, Carla Bley and Herbie Hancock. While attempting to capture something of the style of these artists (including some use of quotation and paraphrase) Dean effectively introduces “outside” elements both harmonically and rhythmically. The last seven tracks of CD 1 more generally combine jazz stylings with atonal gestures and extended techniques for the piano. These tracks show Dean’s versatility as a piano improviser, although often the playing is untidy and one wants to hear more coherently structured trajectories in the improvisations.

CD 2, Outside and Beyond opens with Ostinato which explores the idea of improvising over a simple riff (scored for MIDI bass and drum-kit) which is able to be manipulated in real time as the improvisation progresses. The overlaid piano improvisation begins in a modern jazz style but slowly becomes more and more chaotic until the riff is no longer recognisable and the piano playing is a pulsating sonic morass. A variety of other improvisation frameworks and strategies are employed. A 17th Century keyboard piece by Louis Couperin is the starting point for a radical sonic transformation. There are two SoloDuo duets between piano and computer-generated textures; a piece for two pianos intended for an art exhibition audience to dance to; a number of pieces designed for the improvising pianist to bounce off pre-recorded material; several works based on computer interactivity; and a work based on the live algorithmic processing of an evolving dance music groove against which a more abstract piano solo is superimposed.

Despite the broad mixture of styles and formats there is a sameness about Roger Dean’s approach as an improviser across the two CDs. Certainly in many of the offerings there is a tendency towards playing as many notes as possible as fast as possible. This soon becomes tiring for an ear searching for a more expressive range in both the compositional and improvisational aspects of the compilation.