“Noonan’s unique vocal timbre,  jazz rubato and melodic shaping are used to perfection in this eclectic array of covers, and complemented by the outstanding, empathetic instrumental work of her accompanying ensemble.”

The Sweetest Taboo is so named for what vocalist extraordinaire, Katie Noonan, describes as ‘daggy 80s songs.’ It’s an Australianesque perspective in both description and a culture that defines particular decades of music as they inevitably relate to an individual’s lived experience. This is because music forges identities, especially in childhood and adolescence, and so the reflection back in time can summon forth a range of scenarios, from cherished to embarrassing, with the realisation that one can’t have the music without the attached memory. Here, Noonan describes a child, already deeply immersed in pop culture, donning a hairbrush microphone and carrying within her a dream of making music a pivotal aspect of her life trajectory. The Sweetest Taboo has earned Noonan and her fellow performers an ARIA nomination for best jazz album in this strange twilight zone of a year. Some of the songs reimagined by Noonan here, may, in their original form, wear the badge of dagginess from a current perspective. This could be attributed to the saccharine aftertaste of clunky disco rhythms and the rudimentary synth sounds of new wave in some of the original accompaniments, but these are finely crafted songs with some extraordinary vocalists at the helm cutting through any stylistic tropes. They will continue to withstand any tests time, and an evolving aesthetic, may throw at them. The attention to vocal shaping is, of course, Noonan’s forte and she is able to reinvent these well-known songs while never letting go of the integrity of the originals.

There are three covers of American songs in the list, the rest from Oz, New Zealand, England and Ireland. If I may be bold, the Australian and New Zealand contributions are stunning choices in their unity of purpose, where the lyrics, melody and organically sculpted harmonic progressions have been thoughtfully considered as one. And in the capable hands of this ensemble, that understanding is enhanced.

The meaning of Neil Finn’s magical Don’t Dream It’s Over is made crystal clear here with the beautiful articulation of the lyrics by Noonan and her perfect forming of the melodic contour that gives them such potency. And that wonderful sense of intimacy whereby the entire world with its arrogant casualness, is excluded from its attempts to sabotage a relationship, is so adeptly captured in the musical accompaniment. The physical impact of the double bass offsetting the higher vocal range; the beautiful warmth of crushed jazz chords and melodic improvisation on piano, plus the subtle countermelody on sax and the rhythmicity on percussion carry us away to a beckoning, alternate reality. In the Taboo studio

I always wondered why the band 1927 didn’t make greater inroads over a longer period of time in the popular music zeitgeist. Their songs were so superbly rendered, largely by the awesome Garry Frost, and Eric Weideman’s voice is swoon worthy. But of course, the music industry is a double-edged sword which only the most robust can endure, plus the marriage of band members did not last. Tales as old as time. If I Could is my fave of the band’s hits and it shares with Finn’s song that complete and utter devotion to another human being, a world unto itself. Noonan and her ensemble use a slow burn approach to it on this album, to eke out every last sentiment expressed. So, even the first chorus leading into the middle 8 is underplayed. But from the beginning, gradually, the simple double bass line marking out the root of each chord with Noonan singing the melodic line, leads to the song’s build. The instrumental break allows Hurren on saxophone to let loose with some beautiful and emotive extemporisation, an outpouring that continues as Noonan re-joins, hitting the highest of high notes. Lovely.

In Vince Jones’ Blue, the composer has developed the words around a rhythmic motif that creates musical consistency from one phrase to the next. The words need to fit this rhythmic structure, rather than the other way around. It is deliberate given the nature of what is being conveyed. As with the previous two songs, this is so beautifully written, with the sustenance of this riff and logically developing harmonic structure guiding the melody. As such, the lyrics have to navigate within the music. Because instead of the inward reflection of the previously described works, here, with inevitable loss, the artist looks outward at a noisy and self-absorbed populace. People don’t bother to take the time to indulge in the words of songsmiths. But there is always resilience! Jones’ original leaves us musically suspended and he uses only voice and piano. Indeed, he musically exploits the aloneness he feels and wants the listener to feel. Noonan’s version, however, is nurturing. It ensures that the music acts as a safety net for the poet. All instruments enter quickly and surround the poet with the warmth that music offers in abundance. Noonan adds vocal harmonies so that there is a further richness and fullness and though the ending is not resolute, neither does it leave us hanging, as with the original.

a-ha’s Take on Me would seem a strange choice, a great song, but quite a different style to Noonan’s. But that’s the point and this simple re-working with Noonan’s magic vocal range exploited and complemented by the warm, warm piano work by Sam Keevers, a standout across the entire album, really is quite awesome. Similarly, U2s musically simple, lyrically complex Running to Standstill is given a radical makeover here. While Noonan keeps the pace of the melody in check, intently capturing the Irish lyricism inherent in the original, the band plays on with a rich, intoxicating interweaving of parts that builds the texture to a beautiful peak, a rush. It’s a lush rendition of a song depicting the complexities and vagaries of drug addiction. True Colours and the adventurous rendition of Icehouse’s Electric Blue are also highly inventive in their approaches, True Colours, just Noonan and great improvisation throughout on double bass by Phil Stack. 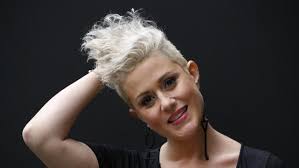 Sting’s Russians tackles the reality of masses of humans being pawns in the games of those who seek to sustain power with utter contempt for any living thing that gets in the way. Sound familiar? It is, in essence, a love song of parents for their children’s future. With our entire planet rebelling against a world’s human arrogance (as we speak) the cold war seems anachronistic now, but in reality, the song, as they say, remains the same. Hey, maybe everyone could collaborate! To be fair, Sting has been working on environmental issues for many years. This too, is a beautifully written song and here, the ensemble doesn’t mess with that, allowing the story to unfold. A soothing piano, simple saxophone, and that voice.

There’s much more. It’s such a generous album, in length (an hour) but even more in musical quality. Despite the melancholic nature of some of the originals, the interpretations here remain at all times supportive and uplifting, just what’s needed at this strange, strange time in history.

Originals of covers on The Sweetest Taboo

Just The Way You Are – Billy Joel

I Wanna Dance With Somebody – Whitney Houston

Running to Stand Still – U2