“This album won the ARIA award for Jazz Album of the Year in 1987. It was re-released in May 2020, to coincide with George Golla’s 85th birthday.”

The orchestra includes Golla (guitar), James Morrison, Bob McIvor, George Brodbeck, Arthur Hubbard (trombones), John Hoffman (flugelhorn), strings led by John Lyle, Chris Qua (bass), Craig Scott (bass), Len Barnard (drums), Byron Barnes (French horn), and Tom Sparkes (Cor Anglais).The presence of orchestral instruments that are not often represented in jazz ensembles determines that it stands out from the crowd in a manner similar to that achieved by the Miles Davis/Gil Evans orchestra of the 1950s. Strings were used in earlier jazz recordings such as Charlie Parker’s Mellow Bird material, but this is relatively exceptional. The presence of strings in jazz changes the music radically. It was originally conceived for instrumentation that did not include them. A major factor in this difference is that the association of stringed instruments with classical music idiom lends a more sophisticated atmosphere to jazz, perhaps making it appeal to a wider audience. Lush Life features music by Duke Ellington and Billy Strayhorn who were close associates and co-composers of several of the pieces. All tunes on the album are by one or both of these two composers. The arrangements are all around three to four minutes in length and by the time the main melody is played, the space for improvised solos is limited, so individual statements are necessarily brief. This ensures that solo passages are carefully crafted to fit the small amount of time available. Lush Life (Billy Strayhorn). This track, appropriately, gives its title to the album. Melody is shared between guitar and Cor Anglais surrounded by lush strings that are also occasionally allowed to state a phrase of the melody. Due to the original composition being more extended than the frequently used thirty-two or twelve-bar forms, there is insufficient time to play more than once through the piece. Apart from some embellishment of one or two sections of the melody by the guitar, there is no other improvisation.

The well-known Ellington blues titled Things Ain’t What They Used to Be begins with two solo choruses by Golla followed by the head played, also on guitar. The guitarist produces one of his trademark solos complete with clean articulation and beautifully shaped phrases. Again, the lead instrument is surrounded with string sounds. There is an economical approach to playing the blues here, with just seven choruses in total; this is not a ‘blowing’ session.

The ballad I Got It Bad and That Ain’t Good opens with a solo trombone playing the initial eight-bar period of the melody followed by guitar for the repeat of that section. The remainder of the track features solo guitar wrapped in strings accompaniment. It sounds very much like music for a Twentieth Century drawing room, very correct and precise in its execution. 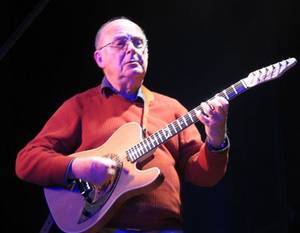 Another Ellington band favourite is Don’t Get Around Much Any More.  I have difficulty believing that the too-brief trumpet solo on this track was played by anyone other than James Morrison, although he is credited only with being one of the four trombonists who play such an important role in ‘backgrounding’ the sound of the guitar lead in these arrangements. As is the pattern on the record, most of the lead and soloing on this tune is played by guitar with a generous amount of string backing.

Following an introduction in which the non-standard instruments and the trombone choir dominate, Golla presents the initial section of the ballad titled Prelude to a Kiss most tastefully. He uses several playing techniques pioneered by other jazz guitarists and in this way, the head is a little pot-pourri of jazz guitar styles, providing a taste of his erudite knowledge of his instrument.

Other tunes on the album are Mood Indigo, Take the A Train, Solitude, I’m Beginning to See the Light, I Let a Song Go Out of My Heart, Do Nothin’ Till You Hear From Me, Creole Love Call and It Don’t Mean a Thing if It Ain’t Got That Swing. The quality of the arrangements is consistent throughout the recording and each piece is a little gem. Don Burrows and George Golla – a famous and long-lived partnership

George Golla has been around for a long time, and he has made many significant contributions to jazz guitar music. In his mid-twenties, he played with a group led by saxophonist Don Burrows that made regular appearances on the ABC in the early days of television. In addition to Burrows and Golla, the band that appeared on ABC television featured Judy Bailey (piano), the legendary John Sangster (vibraphone) and Ed Gaston (bass) as well as some of the best drummers in the country at that time. During the 1970s Golla combined with Burrows to form one of the most loved and widely touring duos in the history of Australian music.

Through these and other involvements, Golla made a deep impression on the ears of young jazz musicians of the 1960s and 70s. His playing style was polished and precise; his improvised lines were lyrically constructed and just plain beautiful. Hearing his sound in the larger ensemble setting of Lush Life, replete with strings, has a quasi-classical quality. It is an attractive and fitting tribute to Golla’s contribution to music in Australia. At eighty-six, he continues to make music.

Don’t Get Around Much Any More