In his book The Imagined Sound of Australian Literature and Music, reviewed here last month by Loretta Barnard, author Joe Cummins heaps high praise on composer David Lumsdaine’s Aria for Edward John Eyre, a tribute to the explorer. David is one of Australia’s great composers (and collectors of our birdsong), and/but has lived in England for decades. Back in the earlier days of modernist music in Australia, there was a Sydney triumvirate of Sculthorpe, Meale and Butterley, to which often was added in absentia David Lumsdaine. David is married to the very well-known English composer Nicola leFanu and it was from Nicola that we had a response to the news about David’s acknowledgement.

Some of her news is sad: “David will be 90 in October – I hope this will get recognised in some way in Australia, preferably by performances. His music seems to be hardly ever played there now, although I hear from ‘fans’ of his work quite often.

“He himself keeps active and fit, but he has very little sight or hearing – the latter is what matters, naturally, and so there is no music in his life – a terrible loss.”

Loudmouth is not a concert presenter but it has invited a 90th birthday tribute from musicologist Michael Hooper. He has agreed and the article will celebrate David in the birthday month, October.

A view from the inside. Jig’s has noticed that in Australia, in order for composers to get their works performed, they need to be present and networking. Disappearing to England may bring benefits but Australian performances may not be among them.

Dying is also highly risky. When did you last, for instance, hear a performance of a work by Peter Sculthorpe. James Morrison Academy of Music in Mt. Gambier has been something of a phenomenon – a private jazz academy for, let’s face it, what is now something of a niche musical genre, in a country town in one of our least populated states. And it seemed to be a success. But some operational upsets capped by the disruptions from COVID mean it might not be operating beyond 2021. 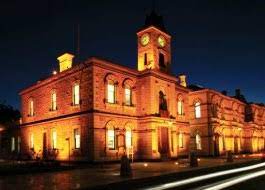 There is a story on the ABC website from a beautiful Asian woman recounting experiences of racism throughout her life in Australia. She gave a recent instance. When she was in her chemist’s shop, a ‘woman with a mohawk’ approached (who doesn’t feel an immediate disdain for such a woman? Yes, there are other prejudices)… Mohawk woman spat in her hair.

The story interposes a few statistics. “Almost 3 in 5 Australians with non-European ancestry (59%) say they have experienced racial slurs.”

Ms Mohawk might make a habit of hair-spitting (adding a bit of self-esteem where the mohawk strategy failed). She may keep a daily score. She alone could cause a significant statistic.

Let’s have THAT statistic and then we’ll have a better picture of whether, as is so often declared, ‘Australia is a racist country’.

The Japanese internet is blowing up over the town of Noto’s decision to spend $230,000 in pandemic relief funding on… a 5.5-ton statue of a squid. The Japanese fishing town, population 16,000, used emergency money earmarked for PPE and other supplies on the sculpture, which they hope will draw tourists and reinvigorate the economy. With our desperate search for regional exports, we could put our experience in building hideous fibreglass landmarks to good use.

The computer has delivered images of interiors from what a magazine said were 11 new very desirable Manhattan hotels. One had a living room, comfy chairs gathered around what usually would be a coffee table, but instead was a bathtub. (This was a photo, not a drawing, suggesting real-life enactments. Pause for fantasy moment.)

They ALL had pretty much the same interior colour scheme: whites, greys, browns.

Then fate delivered a promo on a new housing development an hour out of Sydney (if you hurry), including some house interiors.

But then the Sydney houses were built by a Singapore-based developer. Maybe the furniture for both Sydney and New York comes from Sweden.

Another moment of interior decoration, heard on the teev from an Indigenous activist.

“If you don’t have a seat at the table, you’re on the menu.”

Jig’s once visited Amsterdam and was taken to the beach by chamber music guru, Hans van Waveren of the Holland Festival. Hans set about throwing an old can for his dog to belt after and retrieve. The sand was dirty looking. So was the can. The surf was fairly high but the water looked like factory discharge. The wind howled…

Such an environment could give birth to these monsters of the imagination: