The word love is a rather blunt instrument. It is as powerful as it is imprecise: by turns casual or profound, likely overused, often confusing. When describing human relationships, it most commonly describes romantic involvement. The Greeks, of course, had a more nuanced take, wherein the romantic, passionate eros was just one shade of love. Another kind of love is one improvising musicians know well – what Aristotle called philia, a deep camaraderie of shared experience, cooperation, mutual respect and emotional sharing. 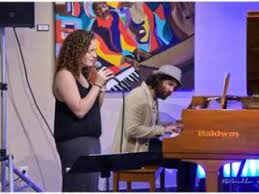 A gentle sense of this philia seems to envelop the new duo album from American vocalist Danielle Wertz and Israeli/Australian (and now US based) pianist Tal Cohen, aptly titled Intertwined. The two young musicians offer a spirited, tender session that in many ways describes a universal impulse of young jazz musicians around the world today: to engage the musical conventions of the jazz tradition as a meeting place for genuine communication and mutually supportive self-expression.

The pair met as students at the University of Miami’s Frost School of Music, and in Cohen’s words, immediately discovered “a genuine trust and a fearless attitude toward experimentation.” Cohen won the Freedman Fellowship for Jazz in 2015, and with the new addition of an ABC Studios recording to the prize, the pianist decided to invite Danielle Wertz to Australia to commit their duo experience to tape. The spirit of adventure seemed to begin here. Wertz boarded a plane for a new destination, “without a set list,” as she says, “without knowing what we were going to record.” Like every improvising musician who becomes comfortable embarking into the unknown, Wertz made the journey with only the knowledge that the musical moment will reveal what is needed, and a trust in the philia between her and Cohen.

Danielle Wertz is a young jazz vocalist that has taken full advantage of a thorough education and proximity to the rich landscape of the modern American jazz institutions. Though clearly possessing a strong command of the tradition in a straight-ahead sense (she was a recent semi-finalist in the Thelonious Monk Jazz Vocal Competition), Wertz seems to be at home alongside more contemporary exponents of improvising singing, able to improvise wordlessly without the affectations of stylistic scat singing. In particular, her restrained use of vibrato as an expressive colour, rather than slathered as a default, allows her to engage wordless melodies with directness and transparency, drawing comparisons with innovators of this style like Gian Slater, Norma Winstone, Sara Serpa and Theo Bleckmann. Wertz is operating with a literate and studious harmonic knowledge, and a refreshing clarity of sound free from the imitative mannerisms that dog many jazz vocalists.

Israeli-born Tal Cohen is justifiably celebrated as a rising star of the piano. After studying at WAAPA in Perth with master saxophonist Jamie Oehlers, Cohen relocated to the US, where at the University of Miami he came to the attention of Terence Blanchard and Greg Osby, both of whom have been recent collaborators. He is of course a bona fide virtuoso on the instrument, with a fully integrated concept, seemingly boundless technique and often-stunning creativity and invention. However, it is not the sheer instrumental craft that leaves the lasting impression. Cohen has an unfailing compositional sensibility in his improvising, able to track multiple streams of logic within parts and often working motific ideas through ingeniously sustained permutations. His listening is deep and incisive and his accompaniment to Wertz’s melodies and improvisations is both nourishing and challenging. On Intertwined, the spontaneous set-up for the recording results in a program that one might expect for an encounter such as this. Alongside one feature original, Cohen’s beautiful Chopin meets Abach and a devised duo piece combining composed sketches from both players (Intertwined), the majority of the disc is made up of reharmonised or openly-approached standards. Four-bar vamps create the foundations for both Autumn Leaves and But Not For Me, while in more straight-ahead readings, Wertz offers Duncan Lamont’s story-telling recitative Manhattan In The Rain (a favourite of jazz singers) against Cohen’s dappled rubato arpeggii. I Wish You Love has a gentle implied swing and some fine trading that soon expands to more open territory.

At first blush, standards seem to be a conservative choice for a duo with this non-idiomatic approach to improvisation and creative potential. However, a closer listen reveals that these old songs are not chosen for their particular meaning, or as expressions of the jazz tradition in-itself. Rather, the tunes provide deeply internalised harmonic and formal structures, giving mutually understood contexts to individual choices. It is the opening Beautiful Love that seems to set the scene most clearly for this core artistic territory. Guest saxophonist Jamie Oehlers establishes an intervallic ostinato, which Cohen alternately adorns with frosty chords or interleaves with contrapuntal lines. Elsewhere, Wertz’s soloing likewise is pointillistic and interactive. This equality of melodic voices and interchangeable foreground/background roles immediately short-circuits the traditional tropes of soloist and accompanist, and reveal the true purpose behind choosing standards. They are rooms to inhabit together, places to meet and talk, contained environments to explore. When each musician is completely confident in the territory, it makes adventures within the frame all the more satisfying – grand individual departures can resolve together, trains of harmonic thought can be shared and intuitively predicted, rhythms can scatter and be gathered up. The musicians leave with a sense of connection – a philia – that feels deep and sustaining. In this recording, we can hear two young musicians using old songs from the American tradition to create something new for themselves. In that moment, the tradition feels alive and personal, making adventures of ensemble playing possible and giving a language for two people to genuinely share of themselves and enjoy each other.