“Beauty comes in all kinds of guises here, and by the time you reach the end you’ve been taken on a trip that is both stimulating and surprising.”

Light and shade. Tension and release. We are all looking for it, one way or another.

That’s all part of making great art, great music, and it’s right at the heart of this sizzling second album from Brisbane-based band Sacred Shrines.

They knew from the outset the kind of sound they wanted: psychedelic flourishes adding colour to mostly muscular but always melodic rock tunes. On this record songwriter and singer Phil Usher brings all his experience to a wide sonic palette. The extremes are more so, the contrasts sharper. And hey, it’s fun too.

The album opens with the shimmering, graceful title tune, the kind of orchestral-inspired wonder that Brian Wilson and The Beatles created in the studio in some of their finest hours. This is a path Usher occasionally explored in his previous band Grand Atlantic, which recorded three excellent albums through to 2011. As well as his rock’n’roll passion, Usher also studied classical percussion at the Queensland Conservatorium of Music. That background certainly shines through here: this song is such an assured mix of orchestral and contemporary that it demands he explore the combination more deeply in the future.

That opener gives way to an explosion of drums and feverish Pink Floyd-ian (Syd Barrett-era) organ on Trail to Find, one of the finest songs Usher has ever written. Sure, Australia has had an explosion of psych-inspired bands from Pond and Tame Impala to King Gizzard, but if your tastes run more to classic pop-rock structures and melodies that ask you to sing along, then Sacred Shrines is the band for you.

The album is laced with the same kind of fizzing energy found in Trail to Find; songs like the summery Keep All the Sunshine, the hook-filled ’60s foundation of Shadow Man and the hip-swinging groove of Paint the Sky.

It is those sharp contrasts that create the story of the album. There is the garage rock of Front Row Future – a little bit glam, a little bit Stooges, with brutal guitar and drums driving Usher’s voice right to the edge. And that is a glorious thing.

Not everything is wine and roses in the life of an indie guitar band, and the frustrations of the long gestation period for an album they started work on four years ago, exacerbated by Covid, sometimes seeps into the music too.

Darker shadows pulse through songs like the thunderous Take the Fall and Stranger, amps howling in protest. On the ominous The Hunter, the volume is pushed to the limit and the tension between bluesy organ riff and guitar freakouts creates a thing of raw beauty.

Then a song like the dreamy Never Far From Where We Are takes the listener back to the golden haze of summer, and the closing Pass Like a Parade hovers with a cloud of voices and strings across a droning B note.

This is an album with a powerful punch but ambitious too: beauty comes in all kinds of guises here, and by the time you reach the end you’ve been taken on a trip that is both stimulating and surprising. 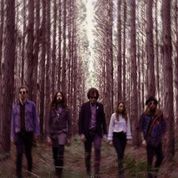 Through the woods with Phil Usher

It was good to have that roadmap to begin with but we don’t want to repeat ourselves either. Sometimes you start with an idea of a song and you don’t know what’s going to become of it later. Songs like Enter the Woods and Pass Like a Parade came through like that. As we were making the album and the more we thought about them, the more they seemed to fit.

You have an unusual background in that you have studied classical music and played percussion in orchestras. How has that influenced the kind of musician you have become?

It is all in the psyche somewhere. I started playing in bands as a teenager and that was always going to be my thing. Some days I would be laying the tympani in an orchestra and that night I would be on stage in a rock band. That is a rare kind of experience and I am glad I had the chance to be in those different musical worlds. There are some things I learnt in classical music that you don’t expect to use again but later with Grand Atlantic I was able to write string and brass arrangements. It has come through again in some of these songs and I would love to do more of that.

This kind of music might not give you platinum records but you know there is an audience for it wherever you take it.

I will confess there have been times in the past year where I have wondered what’s ahead but people like me keep making music because we can’t not do it. We have a label in the US, Rebel Waves Records, that has put some muscle behind the release and it’s selling well overseas. We are happy for the label as well as with the airplay. But success and money don’t come into the equation. It’s nice if those things happen but that’s not why you get into it in the first place.

I have lived in the States for three years playing in a band there, toured in the US and Japan. For me it’s all about the relationships and friendships. You go to a gig and bump into all these people you know through music and they understand you straight away. You can’t buy that.