“Crowded House’s experience is palpable on this album, as is the obvious musical bond with family members – all on the same page in their writing and musical intent.”

Neil Finn walks a tightrope in his musical offerings. His songs are almost always filled with optimism. Even when the lyrics keenly explore the darkness of our current state, the music is uplifting. One of his compositions, from an earlier Crowded House album, Time on Earth, was the reverse. A dedication to band member, the late Paul Hester, People Are Like Suns is devastatingly sad musically, but the lyrics somehow pull the listener out of the abyss. However, this tension the band creates between lyrical and musical conveyance, is one of the attractions of their music. The other is their damned fine craftsmanship as writers and players. Both are enhanced on this album by the tempered use of digital sounds and superb production. 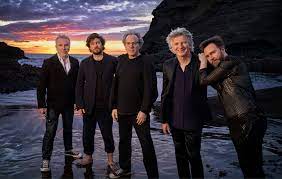 On a number of Dreamers Are Waiting tracks, the band drags us beyond the philosophical and everyday minutiae of lived experience, into the territory of dreams, imaginings and even parody, because, well, reality is just too hot to handle right now. But the group leaves a lot of questions to ponder in the best of the twelve songs on the album.

Of note, the awesome To The Island is a rich, rich anthem of escapism. Indeed, so escapist is it that the master of psychedelic rock, Tame Impala (a.k.a. Kevin Parker) did a remix of the song a couple of months after the original’s release. This Neil Finn penned feast is emblematic of his songwriting style. There are beautiful chromatic sojourns in the melody and Finn has this wonderful ability to navigate the perfect harmonic progressions and addictive riffs to take us on an embodied musical journey. The addition here of sound effects and McCartneyesque upbeat oompah just add a side dish to this already rich repast. And the guitar playing in particular, is so lovely. The chorus is a monster and with its second iteration there’s a lone background voice calling into the (wilderness):

So, although he woos and ‘moves’ another, ultimately, it’s Irene goodnight, and the intention is a lone escape. But on the island depicted in the video, Finn isn’t on his Pat. It’s a dance party, with music doing for people, what music does so well! The track epitomises the lyrical, musical and visual conundrums the whole album exudes. Bad Time Good is more upfront in its intent:

Hey, everybody wants to make a bad time good
Hey, it looks like some kind of medicine for me.

Musically, it’s an absolute delight. Co-written by Finn, his two sons, Liam and Elroy, plus original Crowded House stalwart, Nick Seymour, the verses are in 5/4 time, the choruses in 3s. Despite the cynicism in the lyrics

the music, truly is therapeutic in its lilting lyricism, its gorgeous harmonies, independent riffs that all sync so naturally, and that fabulous way Mr. Finn senior leads one through a building harmonic sequence to a place of awakening, joy, respite. The detail in the production to make the most of the raw materials demonstrates just a few years of experience under the belt (hehe).

Playing With Fire explores the duplicity, the doubt, the confusion in people’s minds as they attempt to trust the inept, the avaricious and the powerful in an endeavour to convince themselves that, hey, we’re playing with fire, but everything will be okay. Or will it? The subject is, partially, climate change. There’s a plea for rationality:

And this time, let’s all be quiet
The next generation’s talking
We’re behind the wheel
We’re driving straight to the wall

Again, the video ties all the different complexities together. In addition to climate change the song explores the social and political structures that have caused it, including – us. The visuals provide a different outcome to the lyrics’ narrative. There is much greater assurance that the majority can somehow see past the persuasiveness of power and greed to a more harmonious future. The music is upbeat, even as the narrator conveys that ‘my brain is getting closer to the edge’. There’s even a heralding brass band. And we wonder who is being seduced by this music, into a blind stupor. Is it the band? Is it the ‘chairman’? Is it us? Or is it a parody, beneath which the message is really, ‘read my lips’? Show Me The Way is a fascinating song written by Liam Finn that combines the fine tradition of Brian Wilson style harmonies in the chorus with a southern country drawl-like rhythmic grounding and requisite dose of guitar twang. Accompanying the song is a video which could have come out of the 60s psychedelic movement. If these weird sound and visual offerings don’t make sense, the lyrics help forge the necessary connections. They explore a man’s troubled inner world, wrought by the wretchedness of the horrific deeds of the KKK, the movement justifying its atrocities under the banner of a burning cross. The irony, of course, is that the man who has taken the fall for his brother, obviously involved, seeks to love and be loved, by God (I assume), ‘for real’. The issue that arises is that many can only see narrow pathways out of deeply distressing histories, to the point where a reconfigured version of the cause is seen as the only cure. Ah, life! The music is sublime; the use of digital effects subtle but highly effective in combining the disparate facets in this song. And the heaven sought is depicted as a harmonic cacophony: here, utterly transcendent.

This is such a rich and diverse album, its greatest strength the differing but interweaving meanings rendered through the mediums of words, music, and, where available, visuals. Dreamers, wait no more!

Show Me The Way