“ ‘Confrontations’ is ultimately, conversations between four superb musicians. Enjoy the unpredictability and ultimately the rewards of close listening to this splendid memento of a Wangaratta stage.”

Melbourne based pianist and composer Joe O’Connor in collaboration with the eminent jazz trumpet virtuoso Scott Tinkler has created a strong suite of compositions called Confrontations. The live recording of this suite from the 2016 Wangaratta Jazz Festival was produced by James Kennedy of ABC Jazz in 2018 and released by the artists.

Scott Tinkler is a multi-award winning performer. His awards include the Melbourne Music Prize 2016, National Jazz Award 1996 as well as multiple ARIA award winning recordings. He has performed as an ensemble player and soloist with the Australian Art Orchestra and has collaborated with musicians from India, Korea as well as Indigenous Australian artists.

The Wangaratta performance was the culmination of several years collaboration between Joe O’Connor and his trio of James McClean, drums and Marty Holoubek on bass.

Across the five movements composed for Scott Tinkler and the trio, these four musicians create music that is intense, intricate and yet full of variety in textures, forms and styles.

The movements – 1. Sometimes Ya Gotta Light a Fire, 2. Sarabande, 3. Obstinato, 4. Nest, and 5. Blocks, feature notated sections as well as improvised explorations of the compositional foundations. The ensemble creates vibrant intensity and contrast even within movements of great drive and ultimate stillness. It is the achievement of contemporary jazz as an exemplar of chamber music, where players can be restrained by the conventions of notation and then in the next breath be released to the relative freedoms of improvisation. The opening, ‘Sometimes Ya Gotta Light a Fire’, gives Tinkler the initial melodic statement, with leaping, angular intervallic structures giving way to piano, bass and drums, winding down to a sparse hi-hat drive and swing section as Tinkler jumps back in with his first major improvisation. The confrontation has begun.

Even in this first intense driving movement there are moments of repose and stasis. From such valleys, a bass solo rises and shapes before a short duet with drums leads to the gentle space of the second, ‘Sarabande’ movement.

Movements two and four, ‘Sarabande’ and ‘Nest’ provide space and repose around sections of drama and drive.

‘Sarabande’ features sweet piano lines linking to the chordal structures that subsequently underlie all of the following improvisations. A melodic solo from Tinkler is followed by a spacious bass solo linking to the third movement, ‘Obstinato’.

Even though each of the five movements have particular characteristics- drive, repose or reflection, they all investigate the compositional material and develop in unexpected and surprising ways in space, texture, rhythm and intensity. 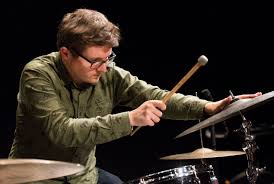 Listen out for Tinkler’s outstanding solo in ‘Obstinato’- just when you think his playing has reached a climax that cannot be surpassed, he steps up another octave with another exemplary run into unknown, unexplored territory.

Listen out for O’Connor’s frequent solo interludes- say after the chunky drums and trumpet statement of melody in ‘Blocks’ as given space and time, O’Connor develops a satisfying groove from where the band springs back to life.

Listen out for the short and frequent bass and drum solos after piano and trumpet have had their say, resonating low and slow in the final quarter of the composition. These moments give the music beating space as the group turns in, winding up to a conclusion.

Confrontations is ultimately, conversations between four superb musicians. Enjoy their interplay and explorations. Enjoy the unpredictability and ultimately the rewards of close listening to this splendid memento of a Wangaratta stage.