Trending
You are at:Home»Reviews»Music Recording»Classical»Chromatic Flight: Music for flute and piano by Graham Jesse

“It is positive to see a whole recording dedicated to new Australian music for the flute. Jesse, Taylor and Tedeschi are to be congratulated for bringing this project – clearly a labour of love – to fruition.”

Graham Jesse has had a long career as a performer, arranger/orchestrator, composer, band leader and producer including nearly two decades as band member and arranger for the Midday Show on Channel 9. He is represented by the Australian Music Centre and is widely recognised as a highly credentialled jazz woodwind player. On Chromatic Flight he teams up with one of Australia’s finest flautists, Virginia Taylor, whose extensive CV includes ten years as Principal Flautist with the Australian Chamber Orchestra and a long-term duo with guitarist Timothy Kain, and celebrated Australian pianist, Simon Tedeschi. Tedeschi is also known for his interest in jazz and operates as a duo with virtuoso jazz pianist, Kevin Hunt. Taylor is no stranger to new music having commissioned and premiered works by composers of the calibre of Nigel Westlake, Elena Kats-Chernin and Mark Isaacs. Graham Jesse composed all the tracks on the recording which is dedicated to Victor McMahon and the great jazz reed player, flautist and educator, the late Don Burrows. Most of the works on Chromatic Flight are relatively brief. The first six are stand alone and are not linked. Each is given a programmatic title that broadly reflects the mood or modality of the work. For example, Flutter makes use of flutter tonguing techniques. The second group of six is organised into two suites, each consisting of three pieces. No track exceeds five minutes in length. Jesse’s music is thoughtful, well-constructed and tuneful: contemporary classical with more than a hint of jazz inflection. As such, the compositional style sits at the intersection of several genres. Unlike some similar recordings that sit across classical and jazz, there are no explicit or implicit minimalist underpinnings in the form, for example, of repeated melodic/harmonic patterns. Jesse’s jazz background is particularly evidenced in the style of the two suites.

The compositions all work well to exceptionally well on the flute, as might be expected from a woodwind player with Jesse’s chops. At times, however, I did feel the piano writing could have featured more opportunities for brilliance and exuberance, particularly given Tedeschi’s technical prowess and jazz experience. I even wondered if the harmony might benefit from a tad extra colour, to add an additional layer of interest for the listener. Put another way, a bit more chromaticism added to the mix of Chromatic Flight. But I recognise this is a matter of taste. Jesse’s craftmanship and attention to detail cannot be doubted. 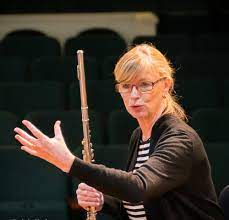 Standout tracks in the first half of the program include Flutter, a clever exploration of flute flutter tonguing underpinned by jazz chords and rhythm, and Contemplation, in which a gorgeously phrased flute melody from Taylor soars above Tedeschi’s uneven, arpeggiated accompaniment. This track felt to me like the score to a short film, conjuring up long camera shots panning over moody, melancholic landscapes.

The two suites, Latin Flute Suite and Jazz Flute Suite, are melodic and entertaining. They would work both well as a recital encore. I heard welcome echoes of the late Don Burrows’ flute style in both ‘Bossa Flauto’ and ‘Silly Galloot’. This musical debt, and perhaps, in the case of Jesse, career impact, is even more evident in the impish ‘Don This’, the first movement of the Jazz Flute Suite. This track swings nicely, almost in two-part counterpoint. I may not be the only listener who hears whispers of guitarist George Golla, Don Burrows’ long term musical partner, in the walking bass line. ‘Waltz’ is also fine track. But as at several moments in this recording, I felt the performers could have played out more, pushing the boundaries of both rhythm and volume. The performances are nuanced but perhaps a little too ‘nice.’

It is positive to see a whole recording dedicated to new Australian music for the flute. Jesse, Taylor and Tedeschi are to be congratulated for bringing this project – clearly a labour of love – to fruition. Congratulations are also due to sound engineer Bob Scott, and to MOVE Records, who continue their decades’ long backing of Australian music and musicians.