Tom Avgenicos is becoming a familiar figure in the sphere of Australian contemporary jazz. His recordings with several creative ensembles during the last few years have placed his distinctive trumpet sound before an ever-increasing audience. He is a skilled performer whose improvisations display a welcome freshness. Delay 45 is a quartet of Sydney-based musicians from various musical backgrounds including hip hop.

ecorded in 2019, the album titled Big Ears consists of six compositions by the trumpeter and two from Roshan Kumarage, the group’s pianist. Some of these are difficult to classify using conventional ‘jazz’ criteria. Entitled simply Imitation 1 (Intro) and Imitation 1, the pianist’s pieces are placed first in the playing order. They involve a process of growing improvisation out of a couple of chords. The careful use of the gradual addition of instrumentation until the full complement is reached in the second ‘track’ is a noteworthy feature. A very tasteful ensemble improvisation section in which there is ample evidence of sensitive interaction between the members of the quartet is another feature of this track. 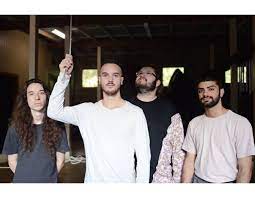 The album is recorded as a continuous performance so Therapy Dog, the first of Avgenicos’s contributions, starts without a pause. It evolves into Room 14 with minimal change of atmosphere but there is a gentle shift to triple meter and a very nice bass solo from Dave Quinn. This paves the way for equally attractive solos from the trumpeter and pianist respectively, all the time complemented by Ashley Stoneham’s drumming.

Rage Quit is a trumpet solo which cleverly breaks up the dominant quartet texture. Avgenicos explores various technical capabilities of his instrument including some ‘special effects’, unfettered by contributions from other quartet members. This morphs into Road to Wernigerode where the exploratory trumpet work is accompanied, first by sympathetic drumming, then piano and bass gestures.

22nd April grows out of the previous improvisation and is a very attractive chord progression and melody played by the rhythm section. As the tension builds, the trumpet contributes to the rise in excitement which builds steadily into the final ‘track’, a strict four-in-a-bar piece titled Strobe. While the rhythm section maintains the rhythmic pad, trumpet and piano in turn interject solos. The cover of this album contains fitting acknowledgement of contributors to the musical development of Delay 45’s members. They might equally have acknowledged the creative output of freely improvising musicians such as members of The Necks, a trio that has recorded improvised performances for at least thirty years. The people acknowledged are among some of this country’s most celebrated jazz artists/educators of the past few decades. The effect of this mentoring has not resulted in music that shows direct influence of the styles of those acknowledged. Rather, the four members of Delay 45 have developed an approach to performing that is creative and individual.

The music on Big Ears demands more than a cursory listening. Upon first playing, I admit that I felt disoriented by some of the material and I needed to work on what they were doing. The style grew on me as I listened with greater understanding each time I heard it. I hope that other listeners derive as much enjoyment from this music as I now have. We are going to be hearing much more from the members of this ensemble.