Pauline Hanson, in her most recent unsuccessful run for office, took to Facebook before Australia Day to ‘urge everyone to make a stand and celebrate our superior western culture and display the values of mateship and courage when you can as a symbol for unity on our national holiday’, preferably ‘at the beach, a large social gathering or the family barbecue.’ Because, of course, punctuation aside, ‘we’ are superior. Hell, white people invented the alphabet, didn’t we? No? What about mathematics? Really, no? Long-range navigation? Astronomy? Irrigation? Farming? Oh dear. Well I’m pretty sure that only white people have ever charred raw meat over an open flame with people whose welfare they care about. I suppose the stakes, or should I say steaks, were relatively low in this case, but notions of cultural (read ‘racial’) superiority, as we know, have had and continue to have devastating consequences. One of the most ‘nationalist’ composers of the 20th century, Béla Bartók, was appalled at the growing current of xenophobia (look it up, Pauline) and subsequent embrace of fascism in his native Hungary before World War II. He wrote that he believed in

the brotherhood of peoples, brotherhood in spite of all wars and conflicts. I try – to the best of my ability – to serve this idea in my music; therefore I don’t reject any influence, be it Slovak, Romanian, Arabic, or from any other source.

He went on to warn that ‘separation from foreign influence means stagnation’. The late Robert Hughes, combating the ‘superior western culture’ crowd in The Culture of Complaint argued that the great strength of western culture was its porous border and capacity to welcome the new.

So to me, if not to Pauline Hanson, it comes as no surprise that Australia’s culture is enriched and strengthened by people prepared to look within and without and who find common ground with other cultures. This has been a central part of Perth-born Liza Lim’s enterprise as a composer for her entire career, and this new recording of three orchestral works performed by two German orchestras is an invaluable document of her work.

Lim mastered orchestral writing, in my view, in two works for the Sydney Symphony Orchestra composed in 2004 and 2005: Immer fliessender is a short companion piece to Mahler’s Ninth Symphony, which, as I have written elsewhere, ‘magically distils whole swathes of Mahlerian sound into single gestures, while Flying Banner (After Wang To) plays with the standard gambits of fanfares before dissolving into the cross-hatching patterns of cicada calls.’ In these two pieces, then, Lim looks to a work of mainstream Western culture and to the traditional Chinese culture to which she, being of Chinese heritage, naturally also feels an affinity. 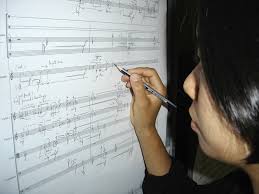 The Compass, the first work presented on this CD in a performance by the Bavarian Radio Symphony Orchestra under Christoph Poppen, arose from the same residency as the two works mentioned above, and is a much larger-scale and more ambitious work. Essentially a double concerto for flute(s) and didjeridu, The Compass is the product of close collaboration between Lim and didjeridu virtuoso and composer William Barton. The didjeridu has appeared in Australian scores since Margaret Sutherland’s The Young Kabbarli and George Dreyfus’s Sextet for Wind Quintet and Didjeridu, and of course the late Peter Sculthorpe found space for Barton’s artistry in numerous extant and new works. And various composers, notably Sculthorpe, have ‘borrowed’ other Indigenous material. The difference here is that the chant which we hear Barton singing at the outset of The Compass, and which provides a motivic germ for the piece, is of his own composition: this is a work of true synthesis. Barton’s text (sung in his ancestral Kalkadoon language) translates as ‘The Heart Sits in the Land/ Fire, Fire, Fire/ A River of Stars’, and this imagery informs that of Lim’s music, which passes through a fascinating gambit of textures, from the mysterious low vibration through waves of microtonal textures, to gleaming, almost Brucknerian brass chorales – always threaded with the glittering sparks of the flutes, played expertly by Carin Levine and the superhuman sounds of the didjeridu. Like Flying Banner (After Wang To), The Compass ends with the music dissolving into non-human sound; the borders of Lim’s sound-world are also porous, allowing her to move effortlessly between spiritual and material states. 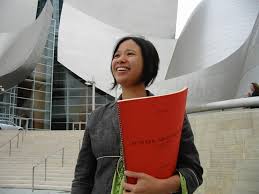 Indigenous imagery, this time from the Kimberley in northwestern Australia, also informs Pearl, Ochre, Hair String notably the materials (listed in the title) used in much local art, but also in the quality of ‘shimmer’ which Lim sees as ‘central to Aboriginal art and ritual culture’. Again this is music of intense surface activity, striking gesture and bold orchestral colour produced, as is often Lim’s wont, by extended instrumental techniques. The Bavarians, now under Lother Zagrosek, more than rise to the occasion in this scintillating work.

The third and most recent piece presented here is The Guest, for recorders (played by the talented Jeremias Schwartzer) and orchestra (The SWR Symphony Orchestra of Baden-Baden under Rupert Huber). Here Lim returns to the spiritual world of the Persian Sufi mystic Jalāl ad-Dīn Muhammad Rūmī, which had inspired her chamber work The Heart’s Ear some years previously. The guest of the title is the divine inhering in the mortal, and is here given voice by the recorder, fluttering and singing over expertly judged and diaphanous orchestral textures that are periodically interrupted by more forceful episodes.

The quality of the playing and recording (and these are live performances) is uniformly terrific; I could only want for slightly more analytical and historical detail from the program notes.

I leave the word ‘superior’ to nuns singing ‘Climb Ev’ry Mountain’, but I am happy to admit to pride at a culture that produces an artist of such sure technique and encompassing vision as Liza Lim.