Keith Humble, Music and Me – Memories of a Shared Life I had the honour in 1971 of organising and promoting the premiere performance of Keith Humble’s Nunique VI in the Great Hall of The University of Sydney. I spent three days prior to the performance working with Keith and his long-time collaborator, Jean-Charles François, to facilitate the spectacle. It had many contrasting elements including a scratch choir (conducted by Barry Conyngham), the Arthur Leach String Quartet, a rock band called If, two electronic music workstations, several dozen very large abstract paintings mounted on stands spread around the hall and various visual projections. There was no seating so the audience had to negotiate its way around a collage of sights and sounds. 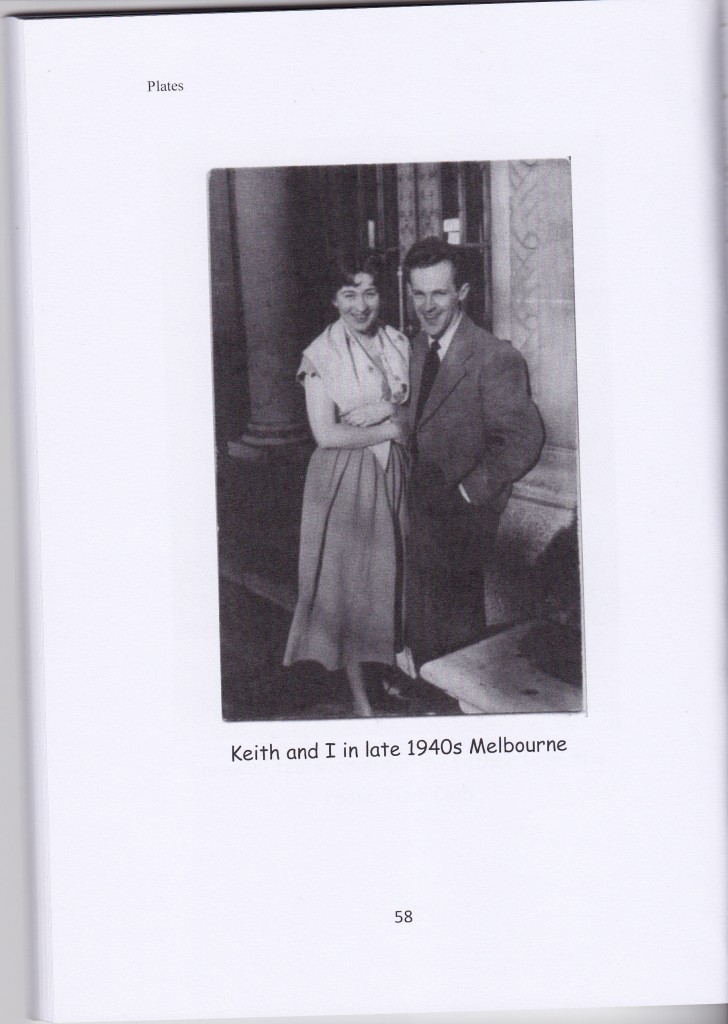 Keith and Jill Humble in the 1940s in Melbourne

The experience of working with Keith and Jean-Charles had a powerful impact on me as it vividly evoked the musical and cultural dynamism of Paris. In fact, Humble’s first experimental multimedia Nunique piece had been performed during the events of 1968.

Having recently bought a copy of Jill Humble’s book because of my enduring appreciation of Keith’s work, I decided I would like to review it in order to bring it to the attention of devotees of new classical music and experimental/improvisatory music. As the title indicates, it a memoir by Keith’s wife, Jill, of their musical and personal life together. As Jill Humble is an accomplished musician, she is able to comment with acuity and empathy on the cultural and professional milieux that she and Keith moved through in London, Paris, San Diego and Melbourne. The book begins with a dramatic account of Keith’s untimely death in 1995 (he was born in 1927), but this chapter also deals with securing his legacy with projects such as the establishment of the Keith Humble Centre for Music and the Performing Arts in Geelong (Keith’s home town) and the archiving of his life’s work for the National Library of Australia.

Following this, there are two chapters detailing respectively the family backgrounds of Keith and Jill. Jill was raised in Poona, India, but was sent to Melbourne for her schooling and then studied at the Melbourne Conservatorium of Music where she first encountered Keith. Both of them were on the same ship travelling to London to further their musical studies but Keith soon after married Ivy Dommett (sister of prominent violinist Leonard Dommett), another passenger on the ship. Keith and Ivy had a son, Robert, but some time after, they separated and Ivy and the child returned to Australia.
Keith and Jill reconnected in Paris and soon after Keith’s divorce from Ivy, they married.

A large part of the book is devoted to their lives in Paris. Keith’s composition studies and employment as an assistant with René Leibowitz and his work as the musical director at the Centre de Musique of the American Centre for Students and Artists are highlighted but Jill’s account of their everyday social activities and struggles to make a go of it in Paris is equally engaging. After returning to Australia briefly in 1956, the couple re-established themselves in Paris, buying an apartment near the Panthéon in the 5th Arrondissement. But Jill’s ill-health brought them back to Australia in 1965. This marked the beginning of Keith’s remarkable career in tertiary education, initially through work at the Melbourne Conservatorium but also later through short-term appointments at the University of California, San Diego. In 1974 Keith was appointed as the foundation Professor of Music at La Trobe University where he established a unique program based on the making of new music with an emphasis on electronic music production.

Keith’s achievements in this period, including his establishment of the legendary Australian Contemporary Music Ensemble (ACME), are contrasted in the book with reports of his frustrations as a university administrator in facing up to annual funding cuts. The stresses of this scenario eventually led to Keith’s resignation from La Trobe University in 1989. His last years were devoted to composing, including a milestone work, Symphony of Sorrows. Although the book is focused on her life with Keith, Jill Humble also weaves in accounts of her own music performance history, her administrative work at the UNESCO headquarters in Paris, her teaching of piano performance in Melbourne schools and her creative activities in weaving and tapestry.