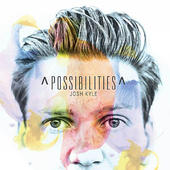 Recently we have seen and are still hearing a renaissance of the sometimes problematical art of jazz singing. Right now we will make some remarks regarding Josh Kyle, whose first CD Possibilities (recorded in 2010) is before us, which we will discuss before moving on to his more recent disc. You will have noted that I have suggested a problematic aspect to the art and I mention that here because here it is largely circumvented, which must be instructive for all interested listeners and practitioners. The problematic aspect is this: some of the phrasing, the oblique angles and variations – the very things which have made it so interesting – have sometimes tended to date it. To make it sound mannered, in short. Something of the same can be said about opera, country music, liturgical music, indeed anything that has been around for a while within the ever-changing spectrum of western music. One of the things that appeal to me about Kyle’s approach is that instead of pruning everything of this nature out in order to be contemporary, he has subtly altered and even extended it so that it becomes both new and redolent of a specialised tradition. He has restored the feeling of jazz singing as “something else”, something other than mainstream, that we might view and hear in an intimate setting with companions who likewise view the world of recent and contemporary times from a different angle. Indeed he has exploited the extreme and decidedly unusual aspects of the jazz singer, the very presence of someone who is both an insider and an alien figure. Hip, in the know, but perhaps a loner. Kyle is accompanied by an excellent English band and recorded at The Bunker in London.

There are originals and what might be considered standards. In fact the opener was once among the most familiar songs in the world to a certain audience, and if you were to count up the listeners living and dead who knew it you might come up with a staggering figure. This was sung and played by, among other notables, Nat King Cole, and Louis Armstrong. As it happens, both Cole and Armstrong had large followings as pop stars – among the biggest popular artists of the 1960s in fact – and they were great contributors to the more specialised tradition of jazz. While some jazz fanatics looked down on their pop hits, Josh Kyle grasps both traditions easily and blends them unselfconsciously.

Nat King Cole’s presence breathes through Kyle’s interpretation of Stardust – for that is the song. I say breathes because there is no direct imitation here, but a soft breeze blows from that direction. I believe, incidentally, that the cadenza-like falling and rising figures of the introduction were inspired by Louis Armstrong’s trumpet – heard often by the composer Hoagy Carmichael in early jazz clubs.

Emotion and sensuality of phrasing link Kyle and Cole, not so much direct similarity. Emotion and sensuality figure elsewhere. Kyle’s voice can strike from oblique angles certainly, and carry much abstract interest, but it can also shape soft, smoothly weaving phrases in a beautiful tone. It is in fact quite hard to sing or play softly yet activate enough overtones to create a good tone. For me a good tone is virtually a visual thing. I can almost see it, in terms of shape and texture. Kyle’s notes have shape and definition in all registers and various volumes.

Let us talk for a moment about swing. Obviously if Kyle sang everything in 4/4 swing he would soon lose many of his younger listeners, however exciting the first up swinger might be. Here 4/4 and Latinate feels are sometimes alternated and sometimes juxtaposed on each other. Leave aside metrical details, at speed Kyle has a sense of relaxed hurry. He is rushing toward some rendezvous but knows he will make it. The title track is an excellent example – hurtling, light, almost breathless despite the relaxation. Flying, to be precise, the words articulated and with presence despite the deliberate sense of lightly crowding each other. This is delightful and very exhilarating.

Of the non-original tunes not well known enough to be called standards are instrumentals by such as Herbie Hancock, Wayne Shorter, and of course Victor Feldman who wrote the title tune. Where Kyle’s name appears beside these composers it means that he has added his own words. These are often exceptional. On his second disc – Songs of Friends, recorded in 2014 – Kyle has exposed himself to vocal hazard by singing with piano accompaniment (Melbourne’s superb Sam Keevers). In fact some introductions are sung a cappella. Sotto voce or soaring, Kyle finishes triumphantly ahead with nary a pitch wobble or misjudgement or lapse of conviction. Sustained notes are in many cases held straight as a dye until a distinctive vibrato emerges about two thirds of the way through. I think this is roughly the golden mean (of proportion) and it reminded me somewhat of the use made by trumpeter Clifford Brown of a slow vibrato which sounded surprisingly modern at a time when vibrato was almost relegated by modernists to the swing era. The melodies here are by Australian jazz musicians, including Keevers, and the words by Kyle, except for the final track, One Moment Please, for which both words and melody were written by fellow singer Kristin Berardi. This last is an exceptionally moving – dare I say shattering? – reflection of a break up. I thought I had heard all the powerful songs in this vein and had no great wish to hear another at my age. We can always be surprised.

For sheer power of expression this disc exceeds the earlier one. And no other song is so directly about a break up. Ballad of the Cranes, whose melody is supplied by Keevers, is full of floating imagery and mystical feeling. Sustained notes had much to do with the power of this recording – as they do with Frank Sinatra’s greatest singing, for instance. Kyle does not sound like Sinatra, but in this regard there is some similarity. Often these notes are held to a point where they either increase in volume or simply intensify in pressure and texture. They burn into you. Use of dynamics extends in the other direction, volume-wise. A sudden drop, and in that intimate dynamic space intricate phrases are brilliantly deployed. Knots are tied and untied, the soft thread released to run in the quiet. Sometimes at breathtaking speed. Kyle’s voice is deployed in both tenor and baritone registers, in a smooth continuum, except where a sudden high tenor arabesque unfurls like a whiplash. Sometimes he moves to the edge of falsetto and sometimes goes up there effortlessly. Though I had not heard this disc I was not so surprised by its power, having heard Kyle and Keevers perform together at Sydney’s Sound Lounge some time ago. For some reason I gained the impression that a section of the audience directly in front of me were actors or connected with the theatre in some way. They had a special appreciation of both artists. Indeed jazz singing can be theatrical in a special way. Take for instance Frank Sinatra. Okay he was not strictly a jazz musician, but he could certainly swing and many of his inventive phrases were jazz-like. In fact many of them were jazz. He sang either with jazz musicians – including most memorably with the Count Basie Band – or with strings, or both.

But this is a different era and you have to give it some intelligent thought. In a couple of days I will be listening to singer Briana Cowlislaw and pianist Mark Isaacs. We will discuss this here or on the SIMA website.

To close I can’t help telling you in words as close as I remember my Aunt Joan’s recollection of the first Australian visit by Frank Sinatra. There was no cheering when he walked onto the stage. There was utter silence. When he sang it was as if an arrow had pierced every heart. A chill, an unearthly thrill. For a while there was no applause. Then it went off like a bomb. That is the power some singers have. Unfortunately I was just a little too young.