A few decades ago it would have been unimaginable for Peter Sculthorpe to have written a piece featuring the saxophone. What changed was the appearance of a brilliant exponent of the instrument, Amy Dickson. Ross Edwards also has been inspired by Dickson to write the piece Full Moon Dances for this release, and is currently working on another major work for her. Sculthorpe’s Island Songs for soprano saxophone and string orchestra with percussion (2012) was one of his last major pieces. Even so, like most of his works, it is an amalgam of previously written material or, to be more precise, previously borrowed material such as a traditional Elcho Island song, a WWII- period popular song from Thursday Island and a traditional mainland Northern Australian song titled Djilile (Whistling Duck). The last of these has been a particular favourite of Scuthorpe’s, appearing a dozen or so times in his œuvre since its first appearance in the film score of Essington (Pringle, 1974) Island Songs is in two movements. The first of these, “Song of Home”, begins with a typical drone with static harmonies texture accompanying a duet between cellos and saxophone. The Thursday Island song played on saxophone is then introduced backed by ostinato-based textures. The central section is an arrangement of the familiar “Djilile” and the movement is rounded out with a return of the Thursday Island song, with a countermelody in the violins. In this section Sculthorpe introduces regular drumming patterns and melodic touches derived from Indonesian gamelan music.

The second movement, “Lament and Yearning” begins with low percussion rumbling followed by a chordal texture reminiscent of the composer’s Irkanda IV for solo violin, strings and percussion (1961), against which is heard the Elcho Island tune, this one in in the strings with a saxophone countermelody. As with virtually every extended work by Sculthorpe, a section of birdcall imitations follows. The work ends with a return of the Thursday Island song. Brett Dean’s single-movement The Siduri Dances for saxophone with full orchestra (2013) also involves substantial recycling of previously written material. The solo part originally appeared as Demons for solo flute (2004). Dean turned this into an orchestral piece, The Siduri Dances for solo flute and string orchestra and 2007 and the current version for saxophone expands the instrumentation to full orchestra. Although I have not heard the two earlier manifestations, it is easy to imagine that the orchestral textures have been added to a self-sufficient solo line.

Siduri Dances is based programmatically on the female deity, Siduri, from the Epic of Gilgamesh. The solo part is meant to represent this character. A feature of this solo saxophone part is the contrast between static and dance-like approaches. It is mostly constructed in sustained melodic lines in contrast to the accompanying material which shows great textural and articulatory variation in providing atmosphere and activity around the solo. The saxophone solo weaves appealing angular lines, reminiscent of Messiaen, which keep gravitating to a central emphasised tone (D). In the program note Dean suggests the piece is in a kind of rondo form. This makes a lot of sense from the listening experience, although the structure is far more complex than this term would imply.

Siduri Dances is a brilliant composition, and is an ideal vehicle for the impressive virtuosic and interpretive talents of Amy Dickson. Ross Edwards’ Full Moon Dances: Concerto for alto saxophone and orchestra (2011), although framed in a less modernistic musical language, is no less demanding on the soloist. And, as in Dean’s work, in Edwards’ concerto the saxophone solo represents a female deity, in this case the “universal moon goddess”.

The work is in five movements. The first, “Mantra with Night Birds and Dark Moon Blossoms”, introduces a simple motive meant as an allusion to an ancient Vedic mantra. This slow and static material is developed and leads to a cadenza-like saxophone solo. A second section introduces an arpeggiated harp idea which serves as accompaniment to rhapsodic saxophone gestures.

By contrast, movements II (“First Ritual Dance”) and V (“Second Ritual Dance”) are fast, and strongly rhythmic movements deriving from the “Maninya” style that Edwards developed in the late 1970s. The saxophone part is highly virtuosic in character. 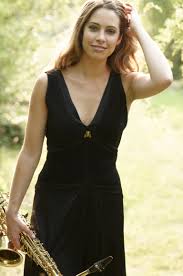 Movement 4 (“Sanctus”) is also slow and reflective, but with a European modal quality. Edwards acknowledges that this movement uses material drawn from his Mass of the Dreaming (2009) along with fragments of plainchant.

All the works and their component movements on this CD are expertly composed and musically engaging. The performances of the soloist, Amy Dickson, are exemplary and are well supported by the Sydney Symphony Orchestra conduced by Benjamin Northey (for the Sculthorpe and Dean works) and Miguel Harth-Bedoya (for the Edwards work).