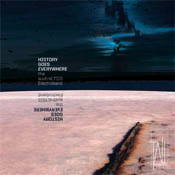 This is modernist music and then some, related in places to jazz and in others to Schoenberg et al, and post-serial music. I love it. Not everyone will but that’s okay by me, and the leader is adjusted to a divided reception. Australysis is assembled in slightly different configurations, and led by Roger Dean, who was the founding director of the Heart Foundation (attached to Royal Prince Alfred in Sydney) and Vice-Chancellor and President of the University of Canberra. He is as well an intellectual in the arts and a practising scientist. Also a classical double bass virtuoso, a composer and jazz pianist. And he is from Manchester. There is more, but to the music… The opening here is electronic – a shimmering, trembling overall pattern of overtones or moire patterns. It is like the eerie sky of a planet, invisible to us, that is perilously close to the sun. Close to ignition in fact. Another overall effect rises within that field, that is like a high, wailing brigade of sirens. Over the the slowly changing electronic fields, Sandy Evans skitters, angles and jumps on soprano saxophone, sometimes releasing a high keening note of some emotional force.

Moire, incidentally, usually refers to watered silk but is also applied to parallel streams of odd number intervals, graphic or sonic, that may form clumps of uneven relationships or dissonances. On the second track Hazel Smith delivers a recitation or perhaps prose poem – called The Blue Bus – through the textures and movements of the group. While this is replete with many clever and amusing sentences, I found myself agonising over whether I really liked it. I decided to leave this in neutral (particularly  as a deadline loomed). It is but one track after all, and I am but one listener.

On track three a kind of one and one and one unaccented chordal pounding down near the bottom of the piano – but pianistic treble figures fly overhead – sometimes so fast they slither, barely differentiated, and sometimes tinkle like breaking crystal – until a sudden deceleration and disassembly introduces a more lyrical slower tempo.

This sets up some of the elements in play. Oh, also: ghostly electronics sometimes take over and draw us out into a considerable sonic distance. History Goes Everywhere and space travels freely too on this disc.

As I say, I love it. Specially the interplay of grand piano and electronics. This too is music for sitting and listening, for walking around, for staring out the window at the flight of birds, the fall of a leaf, traffic, the patterns and movements of industry and nature. Hope you join the club, but you may not enlist on first hearing. Bus Stops In History is a particular favourite of mine. Here Sandy Evans’s tenor saxophone enters.