There were 15 nominees selected by notable classical music people around Australia, shown below with the list of nominees. Of the 15, 13 made application with the required recording of their music and a plan for a career-advancing project on which they would spend the funds if chosen as the Fellow.

The judges have selected four finalists. The winner will be chosen after auditions and interviews on September 19 and an announcement will be posted here.

Matthew wants to find out how the music of an Italian composer from 250 years ago would really have sounded – and then make a recording. Peter, Jessica and Joshua are all looking into the recent past and the future for their instruments, causing the composition of new works, performing and recording. All are planning to make an impression internationally.

Peter de Jager was born in South Africa and came to Australia at the age of 2. He studied piano at the Australian National Academy of Music (ANAM) from the age of 14 and later also studied harpsichord and composition. He has performed as recitalist, as pianist with the MSO and Orchestra Victoria, as a member of chamber ensembles, and as music director for music theatre and cabaret productions. As a composer he already has been commissioned and performed by a number of ensembles. He has performed three times at the Lucerne Festival Academy, artistic director Luciano Berio, has won competitions, made recordings. Peter is especially interested in new music for the piano. If he wins the Fellowship, he would prepare a concert of four most virtuosic and difficult “pillars” of the piano repertoire written about 50 years apart: works by Alkan (1857), Szymanowski (1917), Barraqué (1952) and the Australian, Chris Dench (to be completed next year). He would perform this concert around Australia and then in various locations in Europe. He would make four videos, each of one of the works and including a performance and a discussion. Peter was nominated by Elliot Gyger.

Jessica Fotinos has completed a three-year program at ANAM and is finishing an Honours degree at Melbourne Conservatorium of Music. She has won numerous competitions and awards already. Jessica has performed with the MSO and other Australian orchestras, performed as a concert soloist, with chamber groups, theatre companies, as a recording session artist and as a lecturer and concert presenter. She has commissioned harp works from six composers. Her harp trio Petrichor has performed in Melbourne and Berlin. If Jessica is the 2014 Classical Fellow, she will “create and perform a virtuosic program for solo concert harp that redefines what is possible with the instrument”. The program would include the commissioning of a new work by Evan Lawson. She would promote this program to festivals in Australia and internationally. The program would trace the development of contemporary harp from Stravinsky (eg Les Noces) to the present day in Australia, and would include works by Varese, Salzedo, Stravinsky and the Australians Chisholm and Lawson. Jessica hopes that this will lay the foundation for a post-Fellowship dance project utilising an instrumental ensemble including four harps, based upon an unrealised concept of Stravinsky and Nijinsky. Jessica was nominated by Paul Dean.

Matthew Greco studied baroque and classical violin at the Sydney Conservatorium and performed with the Australian Brandenburg Orchestra. Then he transferred his studies to the Royal Conservatoire of The Hague, a major centre for early music in the Netherlands. He has now performed with a good number of European early music ensembles and other key groups in Australia such as the Orchestra of the Antipodes, Salut! Baroque and the Australian Haydn Ensemble, with which he toured to New York. He has recorded with ABC Classics. As a generalisation, early music performers, more than any other classical performers, are committed to musicological research. The quest is to understand how the music was performed at the time it was written. Matthew’s project centres upon the music of Italian composer Guiseppe Tartini, known mainly for his virtuosic Devil’s Trill Sonata. Matthew would undertake research with an Italian mentor and in locations where Tartini worked and his manuscripts are held. The tangible outcome of this research would be a deeper understanding of the music demonstrated via a recording with harpsichordist Anthony Abouhammad, paid for with the Fellowship funds and promoted on the Vexations840 label in Sydney. Promotional concerts will be given in Armidale and Sydney. Finally, Matthew would commission a baroque bow from Luis Emilio Rodriguez Carrington modelled upon bows that Tartini himself commissioned which made revolutionary changes to the shape of the baroque bow. Matthew was nominated by Neil Peres da Costa.

Joshua Hyde is an Honours graduate in saxophone from the VCA. Since 2008, he has studied and worked from Paris, albeit with regular work also in Australia. He has performed with top European ensembles including the Ensemble for New Music, Cologne, the Ensemble Intercontemporain, Paris, and others in Vienna, Canada and Australia, and has performed in many major festivals. He has taught in Australia, France, Thailand, England, USA, China. He appears to have already a firm basis for an international career. So what is the next step? 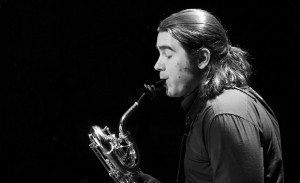 Joshua’s project is in two parts “with each part including the creation of new repertoire and performance opportunities…Both push the saxophone in new directions… incorporating innovation and a search for new horizons for the saxophone.” The first takes works from the belle époque du saxophone, composed by Debussy, Caplet and Schmitt. They were written for saxophone and orchestra but would be arranged for saxophone and string quartet and so expand the possibilities for chamber music performances that include saxophone. A French quartet, Arod, will work on the first versions of the arrangements but Joshua plans to perform them with a number of quartets. The second part of the proposal involves Joshua’s duo with Canadian percussionist Noam Bierstone, scapegoat. New works have been commissioned from three UK composers, workshopped and a video documentary made of the process. They will be finished in November. Joshua would bring them to Australia for performances in Melbourne, Sydney and Brisbane. The concert would include also a work by Australian composer Benjamin Carey. Joshua was nominated by Elliot Gyger.