The prestigious annual Fellowship awards a classical instrumentalist less than 30 years of age with a $15,000 scholarship to undertake a career-enhancing creative project. She has performed with leading new music organisations such as Chamber Made Opera, Golden Fur and New Music Network, co-directed new music ensemble Quiver, played with “Gypsy-death-core” band The Barons of Tang since 2009, and studied and collaborated internationally through the Vancouver Creative Music Institute, Bang on a Can Summer Music Institute, and in Germany and Amsterdam. Jessica Fotinos is a diverse and distinctive harpist, actively involved in orchestral, chamber music and solo performance. Jessica was the first harpist to be awarded a scholarship to study at the prestigious Australian National Academy of Music (ANAM) in 2010, studying with Jacinta Dennett.

She has been a core member of viola, flute and harp trio “Petrichor” and performed with the Malthouse Theatre production “The Bloody Chamber” and ANAM’s collaboration with James Ledger, Paul Kelly and Genevieve Lacey. Jessica has also held principal harp positions in the Melbourne Symphony Orchestra (Metropolis series), Orchestra Victoria, the Australian Youth Orchestra and the Australian National Academy of Music Symphony Orchestra. 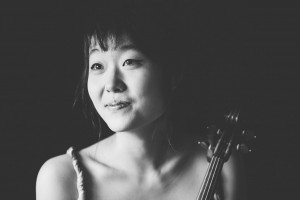 Suyeon Kang has been gaining international recognition since winning the Symphony Australia ABC Young Performer’s Awards at the age of 16. She is currently based in Berlin for her studies at the Hochschule für Musik Berlin ‘Hanns Eisler’ studying with Professor Antje Weithaas, where she recently completed her Master of Music. Pianist Alex Raineri is based both in Brisbane and Melbourne. He is under the tutelage of Leah Horwtiz OAM and Timothy Young and is a student at the Australian National Academy of Music (ANAM). Concurrently he is also undertaking a Doctor of Musical Arts (DMA) at the Queensland Conservatorium of Music (Griffith University).

Alex is the pianist and co-artistic director of the Brisbane contemporary music ensemble Kupka’s Piano who are currently in residence at the Judith Wright Centre of Contemporary Arts. He regularly performs in duo partnerships with soprano Tabatha McFadyen and percussionist Angus Wilson, was selected in 2013 by Universal Music Australia to perform as touring associate artist with Andreas Ottensamer, and has performed with the likes of ELISION Ensemble, Brett Dean, Slava Grigoryan, Southern Cross Soloists,  Ensemble Offspring, and Camerata of St John’s.

The winner will be announced on Thursday 17th September.