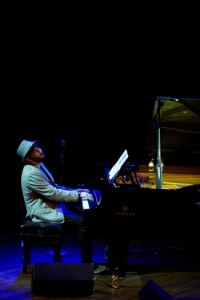 Tal has won this year’s Fellowship after the Freedman Jazz concert held on Monday 20th July at The Studio, Sydney Opera House, where he performed with Jamie Oehlers (saxophone), Cameron Undy (bass) and Tim Firth (drums).

The Freedman Jazz prize involves a $15,000 cash prize which Tal will use to record an album in New York consisting of original compositions and arrangements played by acclaimed Australian and American musicians. This year, for the first time, the winner will be offered three days in the ABC recording studios to work on a project of their choice.

“One of the best young jazz talents in Australia.” -­‐ Jamie Oehlers

“Pianist Tal Cohen possesses an awareness and exceptional sense of musicianship that belies any expectations of what is possible to play in a moment. He embodies a true purity of spirit that is the very definition of improvised music.” -­‐ Greg Osby

Tal Cohen’s unique piano style owes its roots to the Jewish folk songs and classical music he played in his formative years growing up in Israel.

After moving to Perth at the age of 16, Tal received a music scholarship at Churchlands Senior High School. Upon graduating, he continued his music studies at the prestigious Western Australian Academy of Performing Arts, where he completed a bachelor degree, honours and masters in jazz performance.

Tal began performing nationally in 2010 with his involvement in the successful Australian tour of the Jamie Oehlers Quartet, which included shows at Sydney’s 505 and Melbourne’s Bennett’s Lane and Uptown jazz clubs. In the same year he also performed with New York saxophonist, George Garzone.

In July 2011, Tal performed at the Melbourne Jazz Festival in the “Jamie Oehlers Quartet” which featured Australia’s Jamie Oehlers on saxophone as well as highly acclaimed New York drummer Ari Hoenig, and Sam Anning on bass. The group then went on to record the album “Smoke and Mirrors” after which the group toured around Australia in August 2012. Tal has also had the honour of playing with iconic modern jazz bassist, Bob Hurst in Melbourne and Perth shows in June 2012, alongside Jamie Oehlers and drummer, Jacob Evans. “Yellow Sticker”, Tal’s first album as a leader, was released in December 2011. Consisting largely of original tunes, it showcases some of Perth’s finest musicians with Jamie Oehlers on saxophone, Chris Tarr on drums and Pete Jeavons on bass. The album enjoyed an enthusiastic reception from local audiences and the Australian newspaper gave it an impressive 4-­‐star review. The album has already had extensive radio airplay in Australia and on radio stations around Los Angeles and was also featured in full length on Israeli radio station, Reshet Bet in April 2012. To promote the album, Tal teamed up with Oehlers again and in October 2012 the duo played shows in Brisbane, Melbourne and Sydney, joined by highly acclaimed musicians in each city to complete the quartet.

In May 2013 Tal performed a number of shows with world-­‐renowned saxophonist Joe Lovano at the inaugural Perth International Jazz Festival, including a sold-­‐out performance at the Perth Concert Hall to a 1000-­‐large audience. Tal was also honoured to present a set of his original music at this highly successful jazz festival. In September 2013, Tal was chosen to be one of 10 semi-­‐finalists in the Wangaratta Jazz Festival’s 2013 piano competition-­‐ Australia’s most renowned and fierce jazz competition.

Recently, Tal graduated from the University of Miami in the United States, where he received a full scholarship and teaching assistantship while completing his Masters degree under the mentorship of Martin Bejerano. During his time in the states he has had the opportunity to play with drummer Jeff “Tain” Watts, West Coast-­‐based trumpeter John Daversa, saxophonist David Binney, and Maria Schneider.

One of the highlights of Tal’s career occurred in March 2014 when he received a call from Grammy Award-­‐winning trumpeter and composer Terence Blanchard to play a show with his Quintet at the Grammy Museum in Los Angeles. Blanchard also invited him to perform with the “Terence Blanchard Quintet” at the 2014 New Orleans Jazz Festival.

Currently, Tal is scheduled to appear on a European Tour with the Jamie Oehlers Quartet and is working as a professional musician in the Miami area. He hopes to record his second album and relocate to New York in the near future.

The Freedman Jazz concert was recorded by ABC Jazz for broadcast later this year. Click here for more updates from ABC Jazz.

Congratulations to the other finalists in this year’s Freedman Jazz Fellowship, Peter Farrar, Mike Rivett and Gian Slater, and to all the nominees.