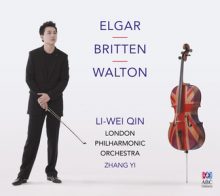 What a treasure trove.

All English – see the Union Jack cello on the sleeve – one of the romantic classics for the super-emotional cello, sea pictures that evoke the sights and smells of Peter Grimes territory and Walton’s follow-up to Elgar nearly four decades later.

Extra pleasure too in that Australia can claim some of the credit for the success of soloist Li-Wei Qin. Born in Shanghai, at the age of 13 he moved to Australia, studying with Nelson Cooke in Melbourne, winning the ABC Young Performer of the Year only four years later. Two more years, thence to Ralph Kirschbaum in Manchester and David Takeno at the Guildhall.

His charm is revealed rightaway in the Walton via an extended accompanied solo that sings ever so sweetly through several registers. So many memorable moments, as though every note must be distinctive. Listen for a languourous portamento.

Thence to a spikey and sprightly Allegro appassionata. Crystal cello technique brings the notes to your own fingertips, a show-off passage goes from way down to way up, recorded so faithfully (in Henry Wood Hall in London, no less) you can hear Qin’s fingers stopping the strings.

Just when it seems his expressive limit has been reached along comes Tema ed improvvizationi. Very slow, giving the cello even more room to vary his vibrato. Two are unaccompanied, others are partnered by harp, vibraphone and celesta.

The printed notes do not reveal whether the soloist is in fact improvising. Who cares?

The most fortunate of our readers will have made their pilgrimage to Aldeburgh and The Maltings to pay homage to Benjamin Britten. I have, soon after he died in 1976. His grave was still a mound of earth.

Standing on the beach, I could hear his sea pictures.

Listening to them, I can smell the seaweed and brine.

Britten has packed a compendium of ideas and images into ‘Dawn’, ‘Sunday Morning’, ‘Moonlight’ and ‘Storm’, and Zhang Yi shepherds the LPO through the whole gamut from serenity to tumult.

Be ready to hit the pause button when the Britten is finished. An interval of ear-cleaning is recommended before embarking on the Elgar.

Same messages, but vastly different languages, of course, though chronologically only a mere quarter century apart.

Throughout, on this CD the balance between soloist and tutti is exemplary, primarily because of the adroit writing, but both playing and directing are clearly aware of the possibilities and at pains to maximize their potency.
And, the most deft of engineering.

Each of the four movements demands re-listening on the spot. The lower the cello goes the richer. Semitones take on a world of expressiveness. Several passages have him climbing, climbing, up to an increasingly tense peak with the orchestra right on his heel. The rising octave portamento of the slow movement carries the brain along with it.

The final Allegro delivers some relief from the intensity of the earlier movements, but echoes of the rising figure, delivered with exquisite good taste, remain.

Elgar signs off as if satisfied. Finis. RIP he writes.