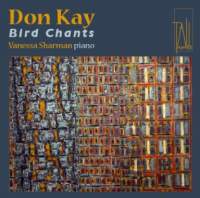 This CD is a significant opportunity: to record a major portion of the output of one of Australia’s senior composers for solo piano. The works presented here cover the period from 1995 to 2008 and were written by Kay for some of the finest pianists in Australia. It is a major undertaking for Sharman, for whom Kay’s Bird Chants and Sonata 5 were written.

Sonata 1 is a surprisingly sparsely textured work, even in the lyrical second movement. Formally, it is not surprising, but Kay’s compositional craft and his ability to control his pitch material and his use of contrasting dynamics (mirroring the contrasting moods and pitch worlds between each of the movements) reveal a composer at full maturity, able to connect the large-scale with the small. Kay wrote the work originally for Ian Munro, and Munro’s ability to command a wide range of piano textures and dynamics. Sharman is able to match the expressive and artistic requests this piece makes. It’s an impressive performance.

Introduction, Scherzo and Postlude shares with Sonata 1 quick contrasts and sudden, but not jarring, shifts in the pitch world. Sharman is up to the technical and more ‘showy’ demands of this work. She is also on form in the performance of Different Worlds, originally written for David Bollard in 1999. Bollard’s work as a chamber musician has made him one of the more sensitive pianists I have heard (or turned pages for!). The challenge for Kay, particularly in the first movement, seems to have been to catch that sensitivity in sound, and for Sharman to perform with great sensitivity. Both deliver. The first movement is hauntingly beautiful and takes its time to make its point, but the wait is worth it. Sharman’s lyricism and senses of line and drama are very evident in this recording. Don’t listen to this on the drive home from work, but in the silence of the concert hall or between the earphones, with eyes shut. In the second movement Sharman proves herself up to the rhythmic challenges presented by Kay. Her touch is totally different too, matching and catching the precision needed. This is a very accomplished pianist!

The title track, composed for Sharman, is a wonderful chance for two fine artists to explore their relationships with the music of Messiaen. Kay’s strength here is that he doesn’t resort to homage through pastiche. An individual voice emerges, which Sharman is able to champion through her own intimate knowledge of the French composer. This is a very interesting work that is superbly played.

Sonata 5, while it has some of the same formal concerns as Sonata 1, is a far more richly textured work, more in keeping with the sorts of sounds that capture Sharman’s innate sense of drama and the passion with which she approaches the piano. Like the other work mentioned here, this work owes something to the personality of the pianist. But Sharman’s interpretative skill allows her to bring elements of her own personality, formidable technique and expressive power to these recordings – which, as usual, are beautifully captured by Tall Poppies. The result here is a fine team and a very important contribution to the recording of Australian music.