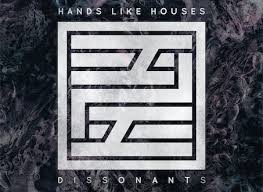 With their third album Dissonants and eight years under the belt, Canberra-based band Hands like Houses have well and truly ‘arrived’.

Hands like Houses have toured extensively over the last couple of years, boosted by the support of the Oregon-based label, Rise. They are quickly impacting on audiences, rising through the ranks as support bands for such luminaries as Sleeping with Sirens, Enter Shikari and The Amity Affliction and appearing at festivals in the US, UK and Australia. Although their music is often classified as post-hardcore, they stick to clean vocals. However there is no lack of grunt in this music. It does that beautiful thing that all good post-hardcore music does and that is to make every resonating cell of your being vibrate in harmonic sympatico. Thanks be to the universe for this kind of music!

And there are no rose-coloured glasses in post-hardcore land. Bizarrely perhaps, these are reflective souls, philosophers hawking their trade of meaning-seeking: the artist’s eternal lament. In Perspectives

And I’m beating down the door
Knuckles bloody broken raw
Tried to take these walls and turn them inside out
It’s all for nothing……….

Well yeah, we do and we’re listening! Perspectives uses digital effects most capably to create a unique soundscape. Woodley’s vocals have that lovely high-pitched clarity which is a feature of the genre. He reaches heavenly heights here. The counterpoint is the bass, which, in the very capable hands of Joel Tyrrell, is a feature throughout. The instrument on this track drops to a Bb. On a five string, it’s usually a B. The resulting resonance is just lovely, particularly with the harmonic fill of the chorus.

In Colourblind, a great sonic concoction like a Heston Blumenthal invention primes the senses for the entire oeuvre of Woodley’s melodic range. Colourblind is more outward looking and also includes some great lines:

Yup. Stunning drumming on this track and an appropriate wash of backing vocal harmonies – unresolved of course!

New Romantics is reminiscent of the work of Dead Letter Circus both in its melodic structure, vocal timbre and harmonic modulations. It is immediately addictive and makes it easy to understand why this track was used to promote the imminent release of the album first expected in October last year.

Glasshouse has a really effective rhythmic complexity where again the drumming leads the pack. It was the third single on the album to be released. It’s hard to know whether the ‘you’ in Division Symbols is a single person or the collective rabble of life, but since, as a listener, I can choose, I choose the latter. The music here is so stirring, so varied in textural build, use of keyboards, effects in the rhythmic marrying of drums and bass and so unlimited in its vocal and instrumental tirade that it is indeed the stand-out track for me.

Momentary allows the guitars space to shine where on many tracks, though working their strings off, they are caught in the mid-range band and therefore the intricacy of their work is not as discernible. This is another quite unique and appealing track.

It is a composer’s album. Although the technique of all players is well, hardcore and thus incredibly proficient, the structuring of the melodies around the lyrics and the instrumental arrangements and production of this album bare the unmistakable sound of brains and ears hard at work. James Paul Wisner (in the family business) and Erik Ron produced the album immaculately. The harmonic thinking of a tinkering keyboard player is obvious. Having said that, the interplay between parts, particularly between bass and drums, synchronous in many instances, is very special. And when the guitars are allowed to shine, particularly later on in the album, for example the soaring on Motion Sickness and the incredible display of technique on Grey Havens well, it’s stunning.

So you ask in this song if it’s your time to go and resoundingly I say ‘no’ because the connection you forge with people through your music is important, really important, as are your nitty-gritty ponderings. ‘Tis the fate of the muse. Reach out, because we need a universal chorus of ‘bitter voices of discontent’ (1).

(1) From the final song Bloodlines