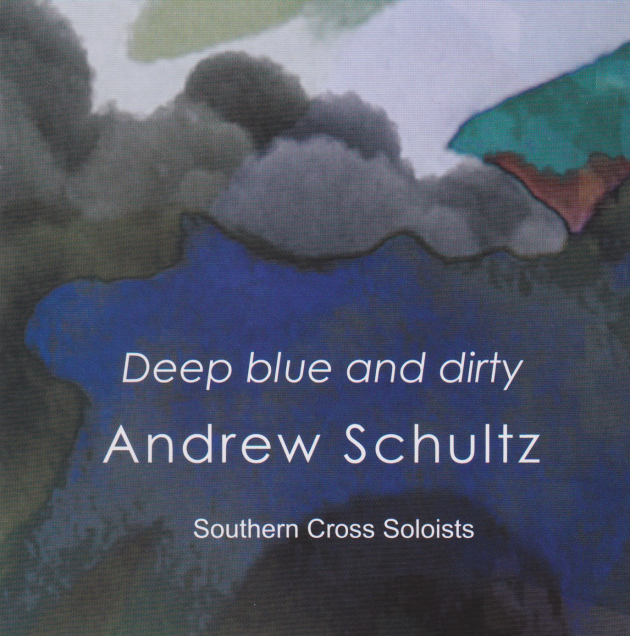 Note: Due to some editorial mismanagement, we have received two reviews of this disc, the other by Elizabeth Silsbury. We have decided that it would be interesting to publish both.

The evocative title – Deep blue and dirty – comes from a piece for bassoon and piano, one of six chamber works on this CD written between 2007 and 2011 by Andrew Schultz. In music that could be described as more ‘deep blue’ than ‘dirty’, Schultz’s flair for mixing music and words is evident, not only in two vocal compositions but also in two instrumental pieces which are influenced by text. After Nina, a trio for clarinet, cello and piano, was inspired by a Nina Simone version of a civil rights song of the 1930s called Strange Fruit:

Southern trees bear a strange fruit,
Blood on the leaves and blood at the root,
Black bodies swinging in the southern breeze,
Strange fruit hanging from the poplar trees.

The sparse, soft opening chords of the piano are joined by a passionate cello melody, then clarinet. The emotional content is not angry, as one might expect from the scenario described in the devastating imagery of the text, but despair and sadness. Paul Dean (clarinet), Patrick Murphy (cello) and Stephen Emmerson (piano) combine well in an expressive and moving exposition of an intensely felt work.

The longest piece on the CD is a song-cycle To the evening star, winner in 2009 of the prestigious Paul Lowin Award. It is performed expertly by Margaret Schindler and Stephen Emmerson for whom it was composed. Schultz has chosen poetry as a stimulus for five songs which ‘reflect on the creative inner life’. Providing contrast in musical expression for both singer and pianist, each one is a gem. The first song, “Lake Isle of Innisfree”, is a setting of words by Yeats which describe the psychological experience of seeking solitude and peace. It is beautiful and introspective, with some luminous writing for the voice. In contrasting mood, the next song “Pied beauty” is a joyful setting of Gerard Manley Hopkins’ delightful poem that begins: “Glory be to God for dappled things – For skies of couple-colour as a brindled cow”. “Mezzo Cammin” is dark and rather bleak in comparison, with spacious and sometimes thunderous writing for piano in Schultz’s interpretation of words by Longfellow: ‘The Cataract of death far thundering from the heights” – impressive. We breathe again in “Money, O!” where the poet W H Davies philosophises somewhat on the value of money:

The piano accompaniments to the five verses are endlessly interesting and varied in this spirited piece. The final song in the cycle gives its name to the whole: “To the evening star”, words by William Blake. It is a deep, peaceful reflection on life, with some glorious curving melodies and great swoops of sound. In the whole cycle, including the choice of texts, Schultz successfully blends creativity and skill to produce a work of depth, sincerity and musicality.

Indigo Invention is a duet, about six minutes long, in which the violin of Alan Smith and cello of Patrick Murphy interweave, progressing from gentle to lyrical with a more energetic section in the middle. It is the sort of delectable music that leaves a smile on one’s face. Deep blue and dirty was commissioned by bassoonist Mark Gaydon, who was rewarded with an excellent vehicle for his virtuosic skills. He and pianist Lucinda Collins give a lively performance of a striking work. Two themes open the work, one might be ‘deep blue’ and the other ‘dirty’, the composer tells us. A set of nine variations follow without a break – four on the first theme, four on the second and the ninth combines the two. Open chords on piano and trills on the bassoon introduce long, lyrical melodic lines, then a jazzy central section which fades down to a soft ending. This is a major addition to solo bassoon repertoire.

Master Mariner – Lost at Sea is a short, atmospheric work for oboe and piano. Sombre, subdued chords from the piano of Kevin Power toll slowly at the start, joined by the oboe of Tania Frazer in a mournful lullaby. Schultz’s notes advise that this is a re-working of a song in his Dead Songs cycle where he took epitaphs from seaside cemeteries in New South Wales. A feeling of doom is accentuated by deep, rumbling sounds from low, muffled notes of the prepared piano. Despite its melancholy ambience, this piece is most enjoyable, possibly because we can listen from the safety of dry land whilst imagining an unfortunate mariner lost at sea. It is a fitting end to the CD program.

Amongst Australia’s treasures are Anne and Brennan Keats, two dedicated music lovers who run the company called ‘Wirripang’. Their aim is to further the growth of Australian artists and literature through CD and print. This is another of their excellent productions. The booklet has plenty of information, including text for the vocal works. The composer himself was producer, working with engineer David Spearritt for all except the title piece, which was recorded by the ABC team of India Hooi and Tom Henry; the acoustics in the different recording locations match well.

In summary, this is memorable music performed by expert musicians, well recorded and presented.