One of the pearls of wisdom offered by awesome guitarist, Bob Spencer, of Angels and Skyhooks fame, was that it isn’t the number of notes you play, but where you place them. Daydreamer is the first album I’ve listened to in a very long time which provokes contemplation of that truism. Darren Hart, stage name, Harts, started playing guitar at fifteen. His parents must have despaired at his lack of preparation for the VCE. Well I’m gathering he was playing music almost exclusively throughout this period, rather than studying quantum physics, because at the ripe old age of twenty-three, he is the consummate musician. And it isn’t just that his incredible rapid fire guitar playing would serve any defence force admirably.

He ‘gets’ music. It is so organic, so natural here, that it would normally be the pride and joy of someone much older and with many such albums under the belt. On this, his album of initiation, he has composed, performed, produced, arranged, recorded and mixed – well – everything. He did seek a little help with the cover art but had input into this too. He pursues the theme of the daydreamer throughout and the artwork explores the blackened asphalt reality of existence with a sky ablaze with psychedelic colour. This, along with a portrait of the artist adorned with big hair and equally gargantuan white collar on open-necked shirt, all point to the fact that Harts has a penchant for all things ‘seventies’. Welcome to the beautiful world of funk. Word gets around almost as fast as a ‘Harts’ (my nomenclature for a Darren Hart guitar lick) and perusing the internet who should fall upon one of Darren’s YouTube videos but the aficionados of his majesty Prince, who invited the musician to, you know, jam with him at his joint in Minneapolis – somewhat more salubrious than the shed out the back we’re told. As you do. But it is very easy to understand why Prince would choose to mentor Harts. Daydreamer is warm and rich and immaculately sculpted. The production is stunning. So there would be an immediate bond in musical genre and the desire for musical perfection.

Harts does, of course, revere Prince. But it is not the only influence shining through here. Indeed the first track, Red and Blue, pays homage to that master of the warped note, Jimmy Hendrix. Indeed the Wah pedal gets a thorough workout on this album. Harts is in a strange place and in many ways the music seems to be his ticket out of a dark world he does not particularly warm to. There is much travelling away from, much daydreaming, much conflict in trying to accept the harshness of his reality. But the songs are so celebratory that one is instantly transported. Red and Blue lyrically reflects Hendrix’s similar ambivalence to life. In many ways, these six lines encapsulate the themes that run throughout the album.

Earth, Wind and Fire are also a strong influence in Harts’ music. Leavin’ It All Behind is one of the best tracks on the album. One can be in the dimmest of head spaces and this track just rockets the listener out of it with such effervescence. It is nu-disco/funk, with a fast-paced, take me to the dance floor beat and has Earth, Wind and Fire style harmonies layering both very close and broader upper, middle and lower register vocals. His superb guitar playing is resplendent and integral to the success of the song and the production! Oh my goodness. Yes, Quincy Jones has also been an influence. Harts knows precisely when and how to build and his peaks are just a sherbet of overlaying, complex, diversely textured patterns. This is where Harts stands apart from many. He’s just so damned good at every single aspect of his musicianship. 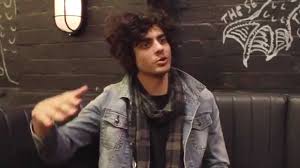 Prince has written some of the finest pop songs ever, because like Harts, he structures them so well and in addition to his superb instrumental skills, his production techniques have always been exemplary. Lyrically? Harts is more restrained and reflective. Angels Walk Below is a dipping of the lid to his Highness musically, but in his use of words, Harts is contemplative, rather than exuberant. Like the poet Rilke, he has a penchant for the beauty and bruising nature of the rose – he draws on this duality and other similar references in his work. His lyrics are simple but sophisticated with an overriding theme here which marks the value of aesthetics in sculpting one’s perceptions of the world. Under a Falling Sky is a ballad and pays the greatest homage to Prince, though again more lyrically discrete. Golden Beach with its doubling of the melody an octave higher is most effective. On this track, and as the album progresses, Harts ventures more and more into electronica blending genres as is the penchant of many artists now. And rather, as was feared, technology making musicians lazy, it just seems to have provided greater enticing challenges. We are the lucky beneficiaries.

It will be really interesting to see where Harts’ heart leads him musically. There is much stylistic exploration on the album, from disco and funk, to soul, to electronica, to the grandness of the epic kinds of songs of some of the super groups of the sixties and seventies. Both lyrically and musically, Harts is still gradually discovering who he is and where he fits. If his latest single is anything to go by, he seems comfortable with a blending of these styles. The YouTube video of this song, When a Man’s a Fool, shows Harts performing all parts. He so obviously enjoys the layering and production process and the luxury that music technology affords the solo artist. It’s a real joy to see the musical articulation of what’s inside his head.

So, the number of notes. Sometimes one can be bowled over by the sheer audacity of a musician’s technical prowess. But it isn’t always ‘musical’ as such, more like a pissing competition. Harts combines technique, an innate, immaculate sense of timing and dynamic sculpting so that both his technical skill and his musicianship illuminate this album. There are some extraordinary contemporary musicians in Australia just now. Harts is way up there amongst them.