Close Your Eyes and I’ll Close Mine 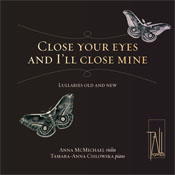 Lullaby. Such a lovely bit of onomatopoeia. I wonder if any of this collection have been road-tested on babies who won’t “go the f*** to sleep”.

No words. Maybe the next step is to invite contributions with words. Surely the most effective soothers are those that are sung.

Both highly regarded musical adventurers, Anna McMIchael and Tamara-Anna Cislowska have put together an interesting collection of lullabies for violin and piano.

Of the fourteen, seven are by Australian composers. George Enescu doubles piano and violin to open his Chanson pour Bercer, then lets them harmonise briefly. Szymanowski’s piano rocks gently while the violin drifts into baby dreams for  La Berceuse D’Aitacho Enia, written for the villa of his hostess in the Basque country, and a transcription of  Stravinsky’s  Berceuse from The Firebird Ballet suggests little eye lids drooping. The Australians vary widely in their views of how to get a baby to sleep.

In Lullaby and Flying Music.Graeme Koehne cuddles his baby with warm waves of piano and a soothing song from the violin. Likewise Elena Kats-Chernin; her Lullaby for Nick invokes a serene image of a mother (soprano voice) crooning to her child. Brett Dean wanders into the stratosphere (Berceuse from Berlin Music); David Chisholm’s Axeman Lullaby is part of a story way beyond the scope of this project, but worth reading in the program notes, Seung-Ah  Oh’s  Berceuse tries different approaches ­– as one does, in the circumstances – her baby’s eyes and ears apparently staying wide open to see what happens next.

Andrew Ford’s Cradle Song is grounded in a passacaglia, giving form and consistency to four minutes of music for a baby to go to sleep by.

The music of Close your Eyes  is part of a larger project with visual images by Isabelle Vigier complementing the music. Worth looking out for.