Cat’s Squirrel presents two of the world’s finest purveyors of noise music, in duo format for the first time. The legendary Merzbow (real name Masami Akita), Japan’s lord of noise, joins Australia’s loudest and heaviest noise guitarist, Oren Ambarchi. This album is a pair of fifteen minute-long improvisations – recorded live at the Campbelltown Arts Centre in 2012 – that cover a full sonic spectrum. All the colours of the noise rainbow, right down to the deepest, darkest, most distorted and fed-back weavings of sound, are conjured by Merzbow’s handmade instruments and effects and Ambarchi’s guitar and effects. Cat’s Squirrel 1 places the listener in a vacuum of whistling distortion, surely a daunting initiation into what is to come. While there are a number of momentary breaks and gradual changes in tone and texture, particularly within the lower register of this stream of sound, the heavy weather of the opening of the track proves to be relatively immovable. The experience of the home listener is one of expectation – when is something going to change? It’s not that this is minimalistic music, it’s just that, at least on the surface, there is a lot of tension here. And there’s definitely no perfect cadence resolution! At eleven and a half minutes the texture thins out considerably, with more distinct high and low sine tones audible, and by 13 minutes this texture completely drops away for a moment, only for the fine crackling static to resume. Creaking and oscillating lower register sounds hint at Ambarchi’s usual soundworld, but on Cat’s Squirrel it is impossible to distinguish between, or even really identify the sonic difference between the two musicians at work, such is the prickly coherence of the music.

Mirroring the close alignment of the playing throughout the first track, its ending is remarkably ‘together’: if this music sounds wild and flailing, like particles whizzing around in space, its makers are surely in complete control of their sound machines. The ego-less nature of this approach to improvisation, like much of the noisier music I have heard, is an achievement in group unity for the performers, but sometimes a source of frustration for the listener, who can be left reaching out in search of any sort of distinguishing mark.

Cat’s Squirrel 2 continues the tone of the first improvisation, although the flumes of high register noise now bathe slightly more melodic content than was present before. Five and a half minutes into the track we encounter the most consonant and melodic passage so far, sounds that may be produced by the upper harmonics of electrified guitar strings. I could be wrong about this, but having seen Oren Ambarchi perform recently (where he used what I think was an EQ pedal to extort wonderfully melodic sounds from his guitar) I think the guitarist may have been the source of this episode. 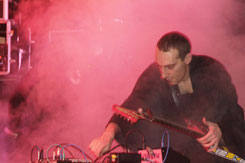 This music is hard to listen to, but that is not because of the teeth-on-edge nature of noise: such a reaction is at first a given, but the more of this type of music you listen to the less anxiety-provoking it becomes (or at least that’s my experience). Cat’s Squirrel is challenging because of its huge sonic range, and the almost constant presence of this full range – from the deep subterranean grunt of the sub-bass up to the highest reaches detectible to the human ear. This means you have to really listen closely just to be able to take it all in and register the small but significant changes that do happen. These incremental evolutions often occur just as your attention is waning.

All too soon (and quite abruptly, as it happens), it is over. While the two improvisations on this curiously titled album may be harsh and unrelenting, the resonance produced by Merzbow and Ambarchi does enfold, and that is, at least for this listener, comforting. The further you travel down this road, the more you can hear the internal melodies and subtle shifts of these two noise masters.