William Barton is one of Australia’s leading didgeridoo players and has taken the wonders of this ancient instrument to the world. He regularly performs around the globe, and his album Kalkadungu won the 2012 ARIA Award for Best Classical Album.

Musically, Barton grew up in both worlds having learned to play didgeridoo from his uncle, an elder of the Waanyi, Lardil and Kalkadunga tribes of western Queensland, while listening to classical music through his mother, Delmae Barton, who is an opera singer. It is no wonder William’s music has blended these two traditions. 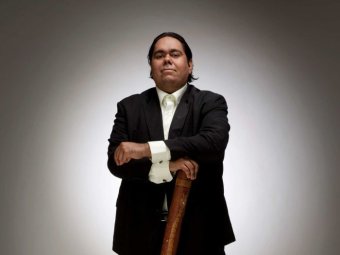 When he met and worked with Peter Sculthorpe, one of Australia’s leading classical composers, both men knew they’d come across a kindred spirit. Sculthorpe taught Barton how to write for classical instruments using western notation and Barton helped Sculthorpe to realise his life-long ambition of bringing Aboriginal music into his composition.

Sculthorpe said “As far as I know, William is the first indigenous composer of Western classical music. It’s just extraordinary that he should write a string quartet and that it should be played in Paris. I’m so excited about it. Having William and his didgeridoo in my life is almost like bringing my music home.”

William Barton’s new album, Birdsong at Dusk, again fuses the Aboriginal tradition of the didgeridoo with western classical music. Featuring the Kurilpa String Quartet, Delmae Barton’s vocals, John Rodgers on violin and himself on didgeridoo, guitar and vocals, this album is full of surprises and delights. The title track Birdsong At Dusk starts with the cello of the Kurilpa String Quartet before Barton’s powerful voice enters singing in one of his aboriginal languages. I wish there were a translation available. The viola and violins join the vocal exposition in impressive counterpoint including some sweet and some quite dissonant harmony. Sulthorpe’s modernism must have influenced Barton’s style. Surprisingly the didgeridoo doesn’t enter until eight minutes into the track and when it does it’s exciting to hear the rhythmic explosion of all five instruments in a wild dance before the piece subsides briefly into a more gentle mood as it heads for its powerful conclusion.

Improvisation features the cello and violin with both William and Delmae Barton weaving around each other vocally before the didg and percussion drive the piece to an eerie ending.

Petrichore is a twelve-minute extravaganza for string quartet and didgeridoo that moves through moods and textures ranging from meditative to joyous. Barton uses the didg in some unusual and creative ways including the use of rhythmic breath. To hear a string quartet being driven by the pulsating rhythm of a master didg player is truly thrilling. Two shorter pieces follow: 7/8 Not Too Late, a didg solo that includes William cheekily saying “Check this out” into his didg and Dreamtime Duet, a beautiful duet between William’s didg and Delmae’s operatic keening vocal.

The album concludes with a live recording, Didge Fusion, that begins with a violin solo by John Rodgers, then is joined by Barton on acoustic guitar (he’s a very good guitar player!) and vocalisations. The didg jumps in to get the piece moving toward the brilliant ending in which guitar, violin and didg elicit rapturous applause from a wildly enthusiastic audience.

William Barton has been awarded an Honorary Doctorate of Music from Griffith University, Queensland and the University of Sydney. While there are quite a few great Australian didg players, as far as I’m aware there are no others who can compose and score for western classical ensembles. William Barton’s future as a classical composer and virtuoso didgeridoo player will be fascinating.

And Petricore finale with William Barton and string quartet: http://www.youtube.com/watch?v=fV8MtnxhciQ