Beyond Black and White – My Life in Music

In contrast with the austere black and white dust jacket, the first thing one sees when opening this book is the vividly coloured endpaper, painted by the nine year old author; such talent would surely lead to a future as a visual artist.

Soon it becomes clear, however, that he was headed for a career as an organist. While still having lessons from his first piano teacher, Miss Pope, the young Roger Woodward began to play the organ at the local church, with difficulty, because his feet did not reach the pedals. His abilities were noted and by early teenage he was given access to the much larger instrument in St Andrews Cathedral (Sydney) and (free) tuition from music director Kenneth Long, sometimes wagging school in order to have more time to practise. 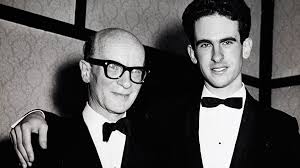 It seemed inevitable to Woodward’s parents that their son would be a musician, so he was transferred to the NSW Conservatorium High School where he was absorbed into the elite group of students of legendary piano teacher, Alexander Sverjensky, a former pupil of Rachmaninov and Siloti; the die was cast.

Woodward’s descriptions of his early years are fascinating, laced with delicious humour which often had me laughing out loud, for example, the picture he paints of one of his examiners: ”A tall, thin man with a serious demeanour, Dr Bainton resembled a boiled egg in an ill-fitting suit with a face like the back of a sandshoe verging on the colour of beetroot”, or the escapade where, in order to get out of trouble with the Con’s director, Sir Bernard Heinze, he “updated” one of Bach’s grovelling letters to his superiors.

That altercation with Heinze did not impede their discussions, later, about the possibility of starting an international piano competition in Sydney; this story makes interesting reading. It is the first of Woodward’s forays over the years into organising special events/festivals worldwide. After graduation from the Con he went to Poland for further studies with Zbigniew Drzewiecki at the Chopin Academy and from there into increasingly busy international performing career. Woodward’s memoir is divided in two parts, personal and professional, inevitably overlapping. The second part deals in depth with his close composer colleagues, their music and occasionally their ratbaggery and shenanigans, for example one concert where he was required to keep his eyes shut during the entire performance, with cameras and strong lights directed at him in order to ensure that he complied, or the episode where he was directed to bash up a grand piano with a sledgehammer. One gets the idea that it is not entirely his fault that he was labelled the enfant terrible of the avant-garde.

Counterpoint through the entire memoir is Woodward’s love of the music of Bach, from the very first hearing of a recording of an organ Prelude and Fugue at age seven to the “epiphany” of the St Matthew Passion. It may seem surprising therefore that he was so committed to contemporary music, however, his discography shows a range from Bach through Chopin and Debussy to modern. The impressive list details 76 recordings (including the seven-CD set of earlier recordings released by the ABC in 2014 to accompany this memoir), several of which have earned awards. In summary, this is a most absorbing and valuable book, lengthy, as it needs to be if it is to cover all facets of a full life: concertising, competitions, composers, conductors, festivals, awards, recordings, commissions, dedications, musical insights and more. The writing is eloquent and often amusing. Some readers may find it a little hard-going at times where the subject matter may be of more interest to those with knowledge of the contemporary art music scene.

Woodward warns us in his opening comments that the “the juicy bits” might be missing; if so, one could concede that it is the prerogative of an autobiographer to choose what to include and what to omit, especially in view of any possibility of a libel suit.

Overall, one is left with admiration for an exceptional man and his achievements.