The Cello Suites of J S Bach are probably the most well-known solo cello works in the repertoire, yet it is hard to know the composer’s true intentions because no manuscript in the composer’s hand exists. Any daring cellist is left with the choice of what information to accept from the more than eighty editions which exist. Then there are decisions about historical authenticity with the instrument, the bow, the strings, the ornamentations, vibrato . . . and how to address the many recordings which go before, back to those of Pablo Casals from the mid 1930s.

One of the principal factors which affect an interpretation of the piece is use of a modern or baroque bow. Not only is the sound produced markedly different, but bowing styles are determined by the physicality of the bow. In this recording, Goldschlager plays on a 1780 instrument made by François Fourier Nicolas, but one which has been modified to suit modern performance, and with modern style bows. This allows for a much greater palette of sounds and range of dynamics to draw from than would be possible with a baroque instrument, but then renders a historically accurate performance impossible. 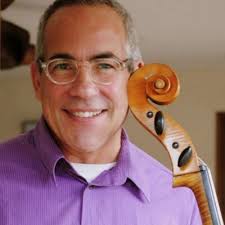 Nevertheless, Goldschlager in this recording is attempting to find a balance between faithfulness to the composer’s intention and the attempt to find a individual voice “as if it were new, rather than old, music.”

Goldschlager’s solution is to find an individual character for each of the suites, which he relates to the home key of each suite. The exaggerated extremes of tone production sometimes border on the overwrought. For example, the tone of suites 1, 3 and 6 is almost sul ponticello throughout. A much warmer and more vibrant tone is achieved with suites 2, 4 and 5.
Goldschlager is determined to avoid the excesses of the early post-romantic recordings with their overuse of portamento and wild vibrato. His sensitive treatment of the Sarabande from Suite no. 5 is particularly subtle and understated. He is mostly true to the dance origins of most of the movements of each suite, although the arched modern bridge dictates that the three and four note chords occurring in the faster movements pull out of time.

The recording is not as detailed as it could be — I would have liked to hear a little more of the bite of the bow on the string to give those stronger dynamics more support.

Passionate fans of the Cello Suites are known to collect several different recordings that present the same music with strikingly different interpretations. Goldschlager’s presentation of the Suites certainly deserves to be included in the cohort of distinctive international interpretations of these iconic works.