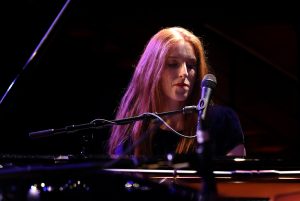 Freedman Jazz 2017 brought together the talents of three multi-talented musicians with their bands at the Sydney Opera House on Monday 30 October. The winner of the Freedman Jazz Fellowship 2017 was announced on the night. Intense competition for the $20,000 cash prize resulted in amazing performances from 15-member big band to quartet. A spirit of cooperation was also evident as musical colleagues supported one another in different roles  The result was an evening of diverse, engaging and highly successful performances. Nick Garbett, trumpeter and composer, led the ever-popular band The Vampires, ably demonstrating his skills as an improviser and instrumentalist.

The judges, distinguished jazz musician/composers Stu Hunter, pianist, Mike Nock ONZM pianist, composer and educator and Dr Phillip Johnston, saxophonist, selected the three finalists from a group of 16 national candidates nominated by outstanding musicians around Australia. Nominees were  judged in part on their proposed career enhancing project for which the prize money would be used.  The judges noted “The three finalists were of exceptional standard but each one brought a conceptual approach quite different from the others. Each put their concept to work in a distinctive and ambitious project. Together they painted a picture of the 21st century developments in jazz and Australia’s part in them. There was a new interest in using their music to comment on important social issues such as climate change and the refugee crisis.”

Stephenson’s performance at the Freedman Jazz Awards concert at the Sydney Opera House reflected an intriguing combination of qualities – a sophisticated command of melody/harmony/rhythm wedded to an emotionally engaging and accessible exploration of song form, beautifully delivered by vocalist Kristin Berardi. The diverse range of her project proposal was subtly expressed in the tightly-focused musicality of the performance with her Hieronymus Trio, which, while expressing  a panoply of sophisticated musical ideas, always served both the lyrical and musical story-telling embodied in her songs, reflecting a truly 21st century combination of art music and engagement with contemporary popular music.”

As noted by arts reviewer John Shand in the Sydney Morning Herald – “the Freedman Jazz 2017  concert transcended the format of competition to create an ambience where all the players are concerned firstly and above all with their music. We heard three widely different aspirations and musical styles and each finalist was confident in their personal voice. In our winner, Emma Stephenson, we have found a multi-talented  artist  who  is  creating her own  musical world, full of subtle strength, intriguing musical shaping, and emotional connection.” Emma Stephenson plans to devote most of her Freedman Fellowship to recording an album in New York comprising eight songs for piano trio and voice. The album will feature New York based vocalists including Australians Jo Lawry, Jane Irving and Liam Budge. She will also invest the award in her podcast ”Stuff You Can’t Say with Jazz Piano”, as well as piano lessons in New York and the development of an online distribution system for creative people to self-publish their own work on their own terms.

Emma Grace Stephenson is an Australian pianist and songwriter who has shared the stage with prolific musicians and bands such as Ingrid and Christine Jensen (Canada/US), Gian Slater, the Sirens Big Band, Sandy Evans, Greg Gould (Australia’s Got Talent 2013), and Brittanie Shipway (The Voice 2014). Her music combines rhythmic, harmonic, and improvisatory elements from her roots as a modern jazz pianist, with folk-pop song writing influences. Emma is the latest recipient of the ‘Jann Rutherford Memorial’ award for young women in the Australian jazz scene. This award facilitated collaboration with the award winning Australian vocalist, Gian Slater, culminating in performances for the Melbourne and Sydney Women’s Jazz Festivals, and a recording at the ABC studios in late 2016.

The Jazz Fellowship is funded by the Freedman Foundation, a philanthropic foundation chaired by Laurence Freedman, which assists and supports young Australians in many areas including medical and scientific programs and the arts. In 2001, Laurence Freedman was made a Member of the Order of Australia for service to the community, to medical research, the arts, and to business and investment in Australia.

Past winners of the Freedman Jazz Fellowships are a Who’s Who of Australian jazz. They include guitarists Ben Hauptmann and James Muller, saxophonists Julien Wilson, Andrew Robson and Matt Keegan, pianists Andrea Keller, Matt McMahon, Marc Hannaford, Aaron Choulai and Tal Cohen, trumpeter Phil Slater, bassist Christopher Hale, vocalist Kristin Berardi and drummer James McLean who are all leaders in Australian jazz. The Fellowships are supported by The Music Trust and administered by the Sydney Improvised Music Association.

ABC Jazz is the media partner for the Freedman Jazz Fellowships and will be covering the event for broadcast at a later date. In addition to the cash prize, the winner will receive three days recording time in the superb ABC Jazz Studios to record, mix and edit a recording. The addition of this recording package makes the Freedman Jazz Fellowship Australia’s most lucrative Jazz award.