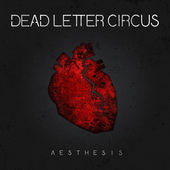 Well, I’m locking my gun in the cabinet with the Wedgwood china and discarding the key just to ensure that my penchant for political, environmental and social activism does not lead to a drift from the lagoon of pacifism to the tsunami of violent extremism. (Endnote 1)  My sexagenarian status may render me inept at actually pulling the trigger in any effective way, but let’s not take any chances. Particularly when I am about to pen a review of an alternative progressive rock outfit also prone to lyrics exploring political, environmental and social activity. Enter stage left, Dead Letter Circus or DLC as they are fondly known. Wow! What happened in the space between this band’s second and third long play ventures? Let’s go back for a moment. Dead Letter Circus, a Brisbane-based outfit emerged with a fabulous first album, This is the Warning which debuted at number one on the ARIA album chart. A smart band, with an incredible work ethic, their ability to connect with an audience both digitally and in live shows is unparalleled. In addition to a strong cluster of songs, the artwork accompanying the album by Melbourne-based digital artist, Cameron Gray helped propel the group into the spotlight. They played gigs with other artists in producer Forrester Savell’s stable including Karnivool, Cog and The Butterfly Effect, so the word spread like the proverbial fire through the cane fields.

Perhaps it was the change in personnel, or exhaustion, or an artistic dry patch but their second album, for this listener anyhow, was a bit of a one-card hand. There must have been some long conversations over the fence after it, because Aesthesis, their third album is a stunner. I have been listening to it now, okay – let’s be honest – exclusively since its release and there is not a track there of which I have yet tired. It is not only that the song writing has taken a massive step up, every facet of the album, from instrumental complexity to production, engineering, mixing and mastering is superb.

The band decided after their initial foray that they wished for a thicker sound. This album is lush and warm in its intensity. There is great diversity in all the tracks and vocalist Kim Benzie, a man with an extraordinary range, has tempered his temptation to reach for the heavens on every track. He uses his vocal ability so well here, swapping and doubling octaves and altering keys. He is ably backed vocally by Luke Williams, the drummer, who uses inventive, organic counter-melodies and harmonies throughout. The guitar playing is, as always, technically complex providing a counterpoint to the voices. DLC are characterised by asymmetric, often punctuated rhythmic devices catching the mover and shaker off-guard, a characteristic of hard and alternative rock genres. These rhythms are masterfully executed. The use of echo and other effects maintains the hearth’s warmth.

While You Wait is the album’s first single and it’s great, but I am continually drawn to the anthemic Y A N A (You are never alone). I have spoken of the global perspectives of alternative bands (Storm the Sky, Karnivool) and this song epitomises this phenomenon. Humans ravish the earth at the expense of, well, the earth. ‘We are the weakest link’. (2) The response is to implore individuals, other like-minded souls – even one’s shadow – to step out of this darkness when there appear no alternatives. There can be loneliness in knowledge, in thoughtfulness, and it is here, ‘reaching out with aching arms’. DLC make use of modes and a touch of chromaticism. Indeed, like Sculthorpe, they have a signatory dropping semitone colouring their melodies providing a similar poignancy. Y A N A is in a C# natural minor. It starts with a simple pulse-like pinging guitar drone. Drums provide a cross-rhythm with this and the legato melody that comes in commands attention with its contrasting lyricism and texture. The chord progression in the lush chorus is so effective.

Uncharacteristically, the second verse is a variation of the first– yes it takes repetition for us to learn anything.

The cover of the album bares a head with a broken heart where the brain should be. Ah yes, know it well! In Silence the composer’s heart is on his sleeve. Here are father, son, a background of violence and betrayal and, in the end, the desire of the perpetrator to make amends, as if that is in anyway possible. The promise from the son is that the cycle finishes with him. It’s such a brave song and in many ways portrays the message throughout. There is a sense in which the album addresses the binary and reactionary mentality of many of the world’s leaders with an emphatic stance for resolution through connection and peace. For example in The Lie We Live the lyrics include:

There is more to what you see,
You’re vulnerable to hate
Because it’s easier than love
You are fed that you are in danger
Shouted from a screen
Unfolding from a page
You react and follow blind.

But then of course there is the irony of the final song Born (Part 2) which trades in binaries. This too, is such a strong song despite leaving us in a state of perplexity as the writer grapples with the paradox inherent in a life to be lived:

And the dark place I dove fits the same height of moments I have stolen from the light. What is transcendent about this album is its intent, its purposefulness. Where words are often at the mercy of an established musical setting, here the music does everything and more to support the meaning of the lyrics. The chord progressions are masterful in this complex album. There is also a really strong sense of unity in the entire production of the work which continues to reveal hidden delights to this listener.

It is perverse that the arts in this country seem not to require a second glance from government, let alone advocacy, unless you’re big and shiny. Arts activity would appear to those in Canberra, to be impotent in its impact on Australian society. And yet so threatening are aspects of it that all school children must be warned of the potential harm of the music with which they engage because it may lead them who knows where and to do who knows what. If only they could see that the assumptions they are drawing about the messages of much alternative music are the complete opposite of what is being expressed.

(2) Please see the TED talk by Yuval Noah Harari ‘What Explains the Rise of Humans’ https://www.ted.com/talks/yuval_noah_harari_what_explains_the_rise_of_humans?language=en